Israel's Merkava Tank Can Roll Over Almost Any Ground Force 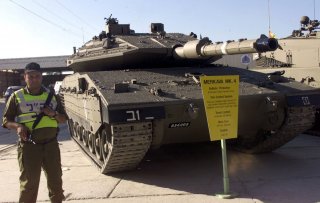 Key Point: The Merkava would likely prove essential to Israel if it needed to seize or acquire territory in some kind of engagement, crisis or military conflict. The main battle tank would allow Israel to breach defenses and advance forward as a heavy firepower node.

The famous Israeli Merkava main battle tank is armed with a 120-millimeter cannon, an advanced anti-incoming rocket-propelled grenade (RPG) active protection system, and an ability to function as a heavy tank and deliver infantry. This set of characteristics have led some people to question whether the tank could be the best in the world.

The tank does have some attributes and methods of attack that could be considered extremely unique and innovative in the realm of armored tank warfare. For example, an interesting report suggests that the Merkava has top-attack missiles to destroy helicopters ann an ability to attack typically unavailable to most modern tanks.

Over the years, the Merkava has both performed well in combat and also been substantially upgraded. One innovation put onto the Merkava year ago was an Active Protection System called Trophy. As an APS system, Trophy integrated sensors with high-speed computer processors, fire control and interceptors to detect, track and take out incoming enemy anti-tank missiles and RPGs.

Also of significance, the Merkava fires heavier anti-tank missiles from its main gun tube and has a target reach of much longer range than most tanks. As a result, it can outrange or destroy most if not all Soviet-era tanks.

While there may not be a mechanized armored threat from its immediate surroundings requiring something like the Merkava to be ready for major warfare engagement in larger numbers, there are some significant ways that it can function as a deterrent against a potential aggressor. The Merkava would likely prove essential to Israel if it needed to seize or acquire territory in some kind of engagement, crisis or military conflict. The main battle tank would allow Israel to breach defenses and advance forward as a heavy firepower node. It has anti-armor and anti-tank weapons capable of striking enemy armored vehicles at long distances before it is even seen. Also, the Merkava brings a unique anti-personnel of fragmentation possibility to increase lethality in attacks against fast-moving small “groups” of enemy fighters.

The Merkava is also armed with a 60-millimeter light mortar that can be fired from within the turret. This allows a Merkava to drop anti-personnel shells on out-of-sight targets behind a wall or on the other side of a hill. Also, the tank provides its crew with additional ways to engage the enemy without resorting to the overwhelming blasts of its main gun, an important consideration in counter-insurgency.

By operating as both a heavy tank and infantry carrier, the Merkava could potentially achieve an unprecedented speed of attack by breaking enemy defenses and sending infantry forward to advance.

Kris Osborn is the defense editor for the National Interest. Osborn previously served at the Pentagon as a highly qualified expert with the Office of the Assistant Secretary of the Army—Acquisition, Logistics & Technology. Osborn has also worked as an anchor and on-air military specialist at national TV networks. He has appeared as a guest military expert on Fox News, MSNBC, The Military Channel, and The History Channel. He also has a Master’s Degree in Comparative Literature from Columbia University.