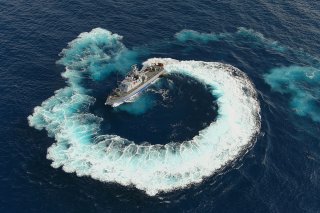 Israel’s navy is set to pack a bigger punch as it received the first of a new class of corvette’s dubbed the Sa’ar 6 class. The first of the group is called INS Magen and sailed to Israel from Germany over the last weeks. It was unveiled in a ceremony at Israel’s Haifa Naval Base on December 2. Israel calls this a major milestone of “fortifying the State of Israel’s economic resources.” What this means is that the Sa’ar 6 will provide the firepower, radar range, and missile defenses to defend Israel’s exclusive economic zone in the Eastern Mediterranean.

This increasingly matters because of tensions at sea. In the summer of 2020, Israel signed on with Greece and Cyprus to build an East Med Pipeline. Israel, Egypt, Jordan, Greece, and Cyprus are also part of the Eastern Mediterranean Gas Forum, which was formalized this fall. Together this means that Israel, Greece, and Cyprus are a new block of countries with common interests. At the same time, Israel has a new peace deal with the United Arab Emirates and the UAE has just signed an agreement with Greece as well. Egypt, the UAE, Bahrain, and Greece have done joint training and naval drills are increasing in the region.

All of this comes as Turkey has been more aggressive in the region, particularly challenging and threatening Greece. Turkey is also shipping arms to Libya and has had incidents with France and NATO countries over the past year.

Israel’s main concern in building the Sa’ar 6 was not about Turkey or the new emerging ties with the UAE and Greece. The ship was planned and constructed over the last half-decade to protect new natural gas discoveries and because natural gas infrastructure is vulnerable to the kinds of missiles that Hezbollah may possess and which Iran would like to ship to Hezbollah. That means that the ship was laid down as Israel conducted its campaign between the wars against Iranian entrenchment in Syria. Iran and Israel have come increasingly into conflict in Syria and Hezbollah-Israel tensions rose in July.

The Sa’ar 6 will eventually possess the latest in Israel’s naval technology, including a large EL/M-2248 MF-STAR radar as well as two Typhoon 25mm remote weapon stations, and missile defense systems. The air defense system will include the C-Dome, the naval version of Israel’s Iron Dome. The ship will have the latest systems from Israel’s major defense companies, Rafael Advanced Defense Systems, Elbit Systems, and Israel Aerospace Industries. Most of its defense systems will be Israeli-built, showcasing Israel’s naval capabilities.

Israel’s President Reuven Rivlin said the ship and its crew were an anchor of statehood, patriotism, and uncompromising commitment. “You are the pride of the Israeli nation,” he said to the crew. “This is an important event - for the Navy, the IDF, and the State of Israel. Behind me is one of the most advanced war machines in the world, which poses a significant leap forward in the IDF's ability to ensure our strength at sea and in naval operations,” said Israel’s Chief of the General Staff, Lt. Gen. Aviv Kohavi. He noted that over the past year, the IDF has halted and prevented attacks on all fronts: preventing rocket fire, exposing tunnels, and thwarting more than a dozen terrorist attacks and smuggling operations in the naval arena. Israeli navy Vice-Admiral Eli Sharvit said that the arrival of the ship was part of a long process that would bolster the country’s power and provide for “daring operational action.” Like other Israeli defense officials, he praised the unique modern capabilities of the ship. “You will not find any ship like it in all the world.”