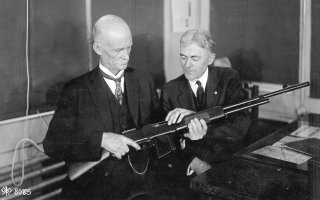 Here's What You Need to Know: These five weapons remain iconinc today.

There is no denying that John Browning was among the most prolific gun designers of the nineteenth- and twentieth-centuries and he left his mark on numerous civilian firearms, including many that bear his name. During his career he worked for the likes of Colt, Winchester, FN Hertsal, Miroku and Remington.

With the help of his brother Matthew, John Browning developed a gas-operating system that was first used in the Colt-Browning M1895 machine gun—a weapon that earned the somewhat mocking nickname “potato digger” due to its unusual operating system, which was similar to that of a basic lever action design.

The weapon fired from a closed bolt and had a cyclic rate of 450 rounds per minute. It saw use in the Spanish-American War, as well as the Second Boer War and even limited use during the First World War. Some of the weapons were later used in the Russian Civil War and the Polish-Soviet War of 1920, and finally in the Spanish Civil War. It wasn’t the first machine gun, but it was the first successful gas-operated machine gun to enter service.

The longevity of Browning’s most famous weapon simply can’t be overstated. It is the Colt M1911 .45 pistol, which was used by the U.S. military from 1911 until 1986, when it was finally replaced by the 9mm Beretta M9 pistol. Even today modernized variants of the M1911 are still used by the U.S. Army Special Forces and U.S. Navy. Colt’s name might be on the handgun, but the M1911 .45 was all John Browning.

During the First World War most of the major powers utilized heavy machine guns based on Hiram Maxim’s design—but even before the outbreak of the war, Browning sought to improve upon that design. He filed a patent in 1901 for an automatic recoil loader, but the efforts to perfect it took more than a decade—only to find that the U.S. military wasn’t actually interested.

Yet, the result was a water-cooled machine gun that was lighter than the Maxim or Vickers and more importantly offered smoother operation. The U.S. military changed their minds when America entered the First World War and the M1917, as it was designated, proved to do just what the Doughboys needed. The .30 caliber recoil-operated machine gun had a rate of fire of upwards of 600 rounds per minute, and it was just the beginning of the things to come!

It is hard to imagine any military wanting to use a weapon designed more than 100 years ago—but that is just the case with the M1919, essentially an air-cooled version of the M1917. The air-cooled system lightened the weight considerably, and while gunners had to be trained to manage the barrel heat by firing in controlled bursts, the design was so innovative that the M1919 has seen use as a light infantry machine gun, mounted on aircraft and even in anti-aircraft roles.

More than 100 years later the M1919 still remains in use in secondary roles with militaries around the world. The same basic design principles of the M1919 were also applied to the M2 .50 caliber machine gun when it was developed in the 1930s.

During the First World War, the machine gun proved ideal at stopping an enemy assault across “no-man’s-land,” and numerous efforts were developed to attempt to find a way to provide the same amount of firepower to an advancing force.

It was John Browning who was among the first firearms designers to successfully address that issue of “walking fire” with his Browning Automatic Rifle, the first truly successful automatic rifle. It was chambered in the same .30-06 Springfield rifle cartridge used in the main battle rifle of the American military during the First World War. More importantly, the BAR was designed to give an infantryman the ability to move forward with sustained fire.

The BAR didn’t entirely live up to the U.S. War Department’s requirements to supply soldiers with a weapon that was both a rifle and light machine gun, but with its 20-round magazine the BAR was more than good enough that there were actually worries during the final stages of the First World War that the German Army would capture and copy its design. The BAR even went on as to serve as support weapon in the Second World War, the Korean War and into the early stages of the Vietnam War.