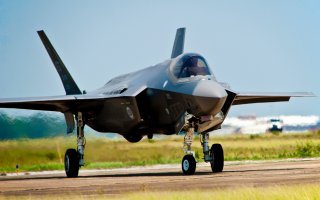 Here's What You Need to Know: New planes and missiles can be designed and tested via computer, reducing the need for many prototypes.

A sixth-generation stealth fighter has already taken flight, a new class of nuclear missiles will soon fly through space and emerging hypersonic weapons are moving from design to production in record time all because of fast-moving digital engineering innovations.

China and Russia are already claiming to fire operational hypersonic weapons, anti-satellite missiles and artificial intelligence-enabled systems propelled by quantum computing. China is raising alarm bells in Washington due to Beijing’s industrial capacity to build new carriers, amphibious assault ships and destroyers at a staggering pace. This may not mean that rival weapons systems and platforms truly rival U.S. ones, yet the pace of development continues to cause worry at the Pentagon, further inspiring this massive push to accelerate the development of new weapons through digital engineering.

As part of this effort, the Pentagon and all the military services are working with industry partners such as Raytheon to refine and implement digital engineering methods throughout the entire sphere of scientific and technologically-focused new weapons programs.

“We need to think about how to get faster. Our adversaries aren’t slowing down, and neither can we,” Madison Dye, WorldView Legion engineering lead, Space & C2 Systems, Raytheon Intelligence & Space, told The National Interest in an interview.

“Development won’t be done by powerpoint anymore. It will be accomplished through dedicated engineering conversations regarding technical data. This will drive down costs everywhere. We are handing over technical data through purely digital means in a digital environment,” Dye said.

Air Force Acquisition Executive William Roper, one of the early leaders and proponents of implementing digital engineering, describes the process as a “digital trinity,” consisting of software development, computer modeling and the integration of common technical infrastructure standards. Roper articulates his vision in a well-known essay he wrote called “There is No Spoon: The New Digital Acquisition Reality.”

“This “digital trinity”—digital engineering and management, agile software, and open architecture—is the true successor to stealth: the next big paradigm shift for military three tech dominance. Rather than just building better systems, it builds systems better—opening doors to faster design, seamless assembly, and easier upgrades—and not a moment too soon!,” Roper writes in his essay.

These new, already proven innovations, were put to the test with the Air Force’s Next Generation Air Dominance sixth-generation aircraft which has already taken flight as well as the service’s Ground Based Strategic Deterrent program to build a new class of Intercontinental Ballistic Missiles. Both of these programs are moving quickly, bringing new unprecedented measures of efficiency, speed, accuracy and effectiveness to an acquisition process typically encumbered by multi-year, bureaucratic milestones and procedures.

Instead of building large groups of unproven and somewhat unexamined prototypes, weapons developers can perform needed analytics upon virtual replications and design models of what a particular offer might look like.

“Whoever is building a system can clearly see in a visual way what the parts look like and move them onto a digital screen in a 3D sense to see how things come together. How can we use digital engineering to make the physical manufacturing worth our time and cost efficient?” Dye explained.