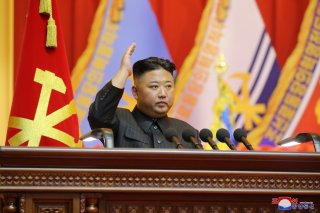 In his July 27 address commemorating the anniversary of the Korean War’s 1953 armistice, North Korean supreme leader Kim Jong-un acknowledged that the coronavirus pandemic had created a “crisis of hardship” in the country.

The supreme leader’s comments marked the third time since the beginning of the year that he has described a negative state of affairs within the country. In his recent remarks, Kim compared the ongoing pandemic to the 1994 North Korean famine, traditionally described by official sources as the country’s “Arduous March,” in which millions of North Koreans lost their lives.

Kim’s indications of his country’s problems are a startling admission from North Korea’s leadership, which has historically downplayed or suppressed news of problems within the country. The supreme leader’s remarks on the country’s crisis did not specifically cite coronavirus infections as a cause for concern, but rather the general declining economic conditions concurrent with the pandemic.

The country has largely sealed its border with China, and commercial trade between the two nations has dropped precipitously in the first half of 2021. Chinese exports to Pyongyang decreased by roughly 85 percent from their pre-pandemic levels, to $56.7 million, according to the South China Morning Post.

North Korea’s food supply has also been severely impacted by recent weather events, according to the state-run Korean Central News Agency. Kim admitted to food shortages in June, and in August, the Korean People’s Army (KPA) announced that its emergency stocks of rice would be made available for public use. In July, the UN estimated that North Korea would face a food shortage of around 850,000 tons in 2021, and the Bank of Korea, South Korea’s central bank, suggested that the country’s GDP decreased by 4.5 percent in 2020, although statistics on the North Korean economy are difficult to gather because of the secluded nature of the country. The Bank of Korea also estimated that the value of North Korean exports had decreased by two-thirds, to $90 million.

International sanctions, including many imposed under the Trump administration in the United States, have also curtailed the regime’s ability to raise funds.

While the North Korean government has implausibly insisted that it has had zero cases of the virus since the onset of the pandemic, and has not begun a vaccination program for its citizens, external observers have highlighted anecdotal evidence that the virus is spreading in the country. A coronavirus outbreak could prove to be particularly catastrophic in North Korea, due to the country’s already poor healthcare system.

Trevor Filseth is a current and foreign affairs writer for The National Interest. This article is being reprinted for reader interests.