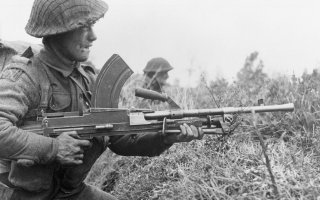 Here's What You Need to Know: The British developed some unique weapons.

To say that the British Army was unprepared for war in 1939 is a vast overstatement. While it was largely hoped that war could be avoided, and the prevailing sentiment was that there could be lasting “peace in our times” from politicians, most notably Prime Minister Neville Chamberlain, the truth was that most nations of Europe saw war on the horizon.

Thus, the British did consider the future of small arms that would be required in the gathering storm. What is also unquestionable is that no one on either side of the lines truly knew what to expect. Clearly, the Allied forces of Great Britain and France expected a replay of World War I—but what has also been widely misstated is that this was expected to be of static trench lines.

In fact, the final year and a half of the Great War from 1917 to 1918 were not so static. The tank, along with new tactics suggested rapid movement, where artillery and machine guns would play a vital role. Thus it was this type of war that Great Britain expected and prepared for, and can be seen in the small arms in its arsenal at the beginning of the war. With the sudden early reverses too, the British had to do what they could as they stood alone against the might of Nazi Germany and that resulted in some unique development in small arms.

During the interwar period in 1926, the British Army updated the nomenclature, and the SMLE officially became known as the Rifle No. 1 MkIII. This version remained in service through World War II, with older rifles being called back to service. The MkIII was used in the early campaign in France, as well as Greece, in North Africa and Italy, and the Pacific and Burmese theaters. Newly produced Rifle No. 1 MkIIIs were produced during World War II in Australia and India. In fact, the Australian versions were produced until 1953!

The MkIII rifle was refined as the MkV and MkVI. But there is confusion as to what happened to the MkIV version. Essentially, the MkIV is a long Lee rifle converted to conform to the pattern of the MkIII—thus it wasn’t an actual model but rather a variation that was adapted to the MkIII specifications. Thus the MkIII led first to the MkV, in which it refined the aperture rear sight. This was followed by the MkVI, which featured a floating barrel design and was the forerunner to the next model of Lee-Enfield.

This subsequent version of the Lee-Enfield was first issued in 1939 but not officially adopted until 1941. It was similar to its predecessors but was heavier, stronger, and yet easier to mass-produce. It is visually designative from the Mk III in that barrel protruded from the end of the forestock. This is also the first Enfield design to be fitted with a spike bayonet (while the return to a bladed bayonet occurred by the end of the war).

Parts from the earlier Mk III and No. 4 Rifle are not interchangeable, other than the actual magazine. It is also worth noting that in 1944 the British revised the use of Roman numerals to that of Arabic numerals.

The British saw a need for a smaller version of the Lee-Enfield, and while there was in fact a basic carbine version, which had produced in limited numbers, the result was the Rifle No. 5 Mk I, which is also known as the “Jungle Carbine.” This version was lighter in weight and featured a rubber butt-pad, as well as a prominent flash hider and cut down stock. It had a menacing appearance but also a substantial kick. Its biggest flaw was a wandering zero that made it highly inaccurate. A refilled version, the No. 6 MkI was in development when the war ended.

At the outbreak of World War II, the British lacked even a semi-automatic rifle. With the nation in a defensive state, there were only limited attempts made to fill this void. One of these was the Charlton Automatic Rifle, which was essentially a conversion of obsolete Lee-Metford and SMLE rifles using a new self-loading system. Two versions of the gun were developed, and approximately 1,500 were used by Commonwealth (most New Zealand) forces. Except for a few that survived in museums, virtually all the guns were destroyed in a fire shortly after the war.

The British had learned from the experience at the end of World War I that there was a need for a squad light machine gun, and the result was the Bren Gun, based on the Czechoslovak-designed ZB vz. 26 light machine gun. The name “Bren” comes from the first two letters of Brno, the place of origin of the ZB and the “en” from Enfield, the maker of the Bren.

The Bren fired the same .303 ammunition as the Enfield rifle and thus was not a light weapon. It is distinctive for its top-mounted banana magazine. It was developed as a gas-operated light machine gun and had a firing rate between 480 and 540 rounds per minute. While it could be fired from the hip, and supported with the sling, it was equipped with a bipod and was meant to be used in the prone position. The Bren Gun was operated by two-man crews, with one man carrying the weapon and another carrying a spare barrel, tool kit, and extra magazines. In a squad or “rifle group,” several soldiers could carry extra magazines.

In the years up to World War II the British saw little need for a submachine gun, but following the evacuation from Dunkirk, the army was in short supply of all small arms. The British began purchasing Thompson submachine guns from the United States, and in 1941 decided to design its own model.

The Sten is actually an acronym, coming from the names of the designers Major Reginald V. Shepherd and Harold Turpin along with the EN for Enfield. Some four million were produced during World War II in numerous variations. All of the models are similar in that the gun was essentially a tube with a barrel mounted to the side. As with other submachine guns of the day, the Sten was a blowback-operated small arm that fired from an open bolt.

It was cheap to produce but far from accurate, with an effective range of just one hundred meters. It was designed to fire 9-millimeter, so as to make it compatible with captured German ammunition, although the straight stick magazine (again common in that era), caused some loading and thus jamming problems. The gun saw numerous upgrades during the war, including versions with a wooden stock and foregrip, as well as models that could be fitted with the Enfield spike bayonet.

The Sten was essentially obsolete by the time it was introduced, but actually remained in service with the British military through the 1960s. Because it was cheap—and easy to make—the Sten was produced under license and without a license by various nations around the world, notably the Israel Defense Force.

At first glance, the Vickers-Berthier could be confused with the Bren, but in fact, this gun was in direct competition with the Bren in the years leading up to World War II. It was based on a French design from World War I, but the VB provided to be heavier and longer than the Bren—thus the British rejected it.

However, the Vickers-Berthier was adopted by the British Indian Army and saw service in World War II and with the Indian Army after the independence of India in 1948.

Many nations, including the United States and the Soviet Union, relied on World War I hardware in World War II, as did the British with the Vickers Heavy Machine Gun. The water-cooled weapon had been the primary British machine gun since 1912 and it served again in World War II.

As with the Bren and the VB, it used the familiar .303 ammunition. Because it was water-cooled it was used mostly on vehicles, such as light tanks and motor gun boats. As an infantry weapon, it required a team of three to move, but so reliable was the weapon that soldiers seldom complained about lugging it in the jungles and mountain campaigns during the war.