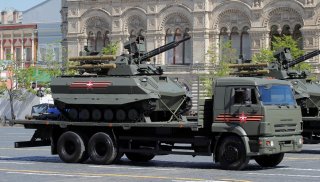 Here's What You Need to Remember: Arguably most problematic of all, however, was the discovery that the remote-control system, which officially had a range of 1.8 miles, only proved effective up to 300 to 400 meters in a lightly urbanized environment. Over such short distances, the control vehicle is likely to become exposed to enemy fire.

This stands in contrast to a source that told Jane’s that the system had “…demonstrated high performance in an operational environment.”

The Russian Army reportedly procured twenty-two Uran-9s in 2016 from the JSC 766 UPTK company. The robo-tanks are apparently attached to support infantry and engineer units by engaging in reconnaissance and fire support missions, rather than being concentrated in independent maneuver formations. The Uran-9 is also being offered for export by the state-owned Rostec Corporation and was photographed being inspected by General Min Aung Hlaing, commander of Myanmar’s armed forces.

To start with, according to Anisimov, the Uran-9’s thermal and electro-optical sensors proved incapable of spotting enemies beyond 1.25 miles—one-third of the 3.75-mile range in daytime or half that at night officially claimed. He also stated, “The OCH-4 optical station does not allow detecting optical observation and targeting devices of the enemy and gives out multiple interferences on the ground and in the airspace in the surveillance sector.”

The problem grows more acute when considering that modern war zones like Syria already experience extraordinary electromagnetic activity from communication signals and drone-links—as well as extensive jamming, spying, and other forms of electronic warfare. The bandwidth consumed by the Uran-9s might not only limit how many can be deployed in a given sector but may make them a conspicuous target for hostile electronic attacks, despite the manufacturer’s claims that the data-links are hardened against such interference.

According to Jane’s, Rostec is still working to improve the Uran-9’s range, response-time, and data-bandwidth. During the huge Vostok 2018 military exercise, the robot-tanks were reportedly deployed to provide overwatch fire support for Uran-6 de-mining UGVs and combat engineers while they cleared simulated defensive obstacles.

In a sense, the underwhelming combat test in Syria highlights why robot tanks haven’t shown up on the battlefield sooner, despite the component technologies have been available for decades. Developing reliable long-distance communication links, sophisticated autonomous operation algorithms, and well-integrated sensors and targeting systems to allow a distant operator to identify and engage targets all pose significant practical challenges.

This article first appeared in January 2019 and is being reprinted for reader interest.