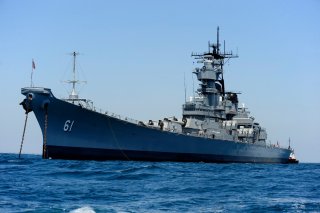 Here's What You Need To Remember: The Type 4 completed testing in March 1944 and was accepted into service.  But by then, the IJN was looking to use the Type 4 offensively as it grew clear the Japanese home islands would soon come under attack.

Imperial Japan faced a vexing dilemma in World War II: it had military bases sprawling across far-flung Pacific islands from Rabaul in Papua New Guinea to the Attu and Kiska islands near Alaska. But the merchant ships necessary to supply, reinforce and especially feed those garrisons were being sunk left and right by the U.S. Navy’s highly effective submarines and bombers.

The Imperial Japanese Navy (IJN) increasingly had to rely on its own submarines to deliver supplies to its starving garrisons. But experience during the Solomon Islands campaign revealed submarines were vulnerable while attempting to ferry supplies ashore at night.

Japan had already developed amphibious tanks, as well as Ko-Hyoteki midget-submarines that could be carried on the decks of larger mothership submarines to launch deadly raids on enemy ships in port.

So in 1942 Commander Hori Motoyoshi began working at the Kure Naval Yard to combine those concepts in a tracked amphibious vehicle that could swim off the deck of a submarine, then wade across shallow reefs and onto beaches to deliver supplies.

A prototype Type 4 Ka-Tsu vehicle was ready by 1943. Though sometimes described as an amphibious tank, the Kat Su was truly more akin to U.S. Marine Amtrac amphibious tractors used to land troops ashore.

The bizarre-looking vehicle’s boat-shaped hull measured 11 meters long and had raised driver and commander’s tower. Three additional crew occupied its water-tight compartments and disposed of two Type 93 13-millimeter heavy machineguns atop its center deck. The Type 4 had only minimal armor ranging between 3 to 13 millimeters, meaning some parts could be penetrated by rifle bullets.

The 16-ton vehicle crawled no faster than 12 miles per hour on land using its 62 horsepower gasoline engine, or could swim at half that speed using its two propellers, situated in retractable ducts on its rear hull. In theory, the Ka-Tsu would burble ashore at night, deposit up to 40 soldiers or four tons of supplies, hide during daylight hours, then swim back to its mothership once the cover of night had returned.

The Type 4 completed testing in March 1944 and was accepted into service.  But by then, the IJN was looking to use the Type 4 offensively as it grew clear the Japanese home islands would soon come under attack.

At first, it considered using the Type 4 in a kamikaze role similar to its Kaiten manned torpedos. But eventually, the IJN instead decided to modify the Type 4 to carry to carry two 450-millimeter Type 2 torpedoes mounted atop  each side of its boxy hull.

The U.S. Navy often anchored ships in shallow island lagoons that would be virtually impossible for Japanese submarines to penetrate. But the Type 4s could simply cross shallow reefs on their tracks.

Five large Japanese ‘cruiser’ submarines (I-36, I-38, I-41, I-44, I-53) were modified to carry two Ka-Tsu tanks each for a planned raid on U.S. warships anchored at Majuro in the Marshall Islands. Seven smaller submarines would escort the tank-carrying subs into position, and then pick off American carriers as they tried to flee the carnage.

This attack would coincide with a larger strike (Operation Yu-Go) executed by 800 carrier- and land-based Japanese warplanes, and commando raids by Special Naval Landin Force marines. After launching torpedoes, the Type 4s would support the SNLF raiders and help transport them back to their ships.

But lugging two 1,870-pound torpedoes left the Ka Tsu unbalanced and underpowered. Moreover, the submarine branch hated the idea, accurately forecasting the Type 4’s engine compartments would flood while the submarine was submerged.  Furthermore, trials revealed it took 20 minutes to remove the Type 4’s watertight engine covers and start its engine, during which time the surfaced submarine would be visible to enemy radars and highly vulnerable to attack.  And the noisy, ponderous and lightly armored swimming tanks would have been sitting ducks to the small PT boat assigned nearby for base security.

Still, the Japanese Navy deployed floatplanes to case out Majuro in March 1944, and fleet commander Admiral Toyoda Soemu overruled skeptics, optimistically hoping the unconventional assault could amount to a turning in a sort of “second Pearl Harbor.”

But the impetus and material to execute Operation Tornado never quite came together.  On May 3, a Combined Fleet notice announced “…it was discovered that the special Type 4 assault boat had performance defects such as noisy engine, low speed, and caterpillar tracks breaking in sediment. It was judged that the May 12 operation was impossible, and it was postponed.”

The 49 Ka-Tsus built never saw action and were later found abandoned after the war in Kure.  The sole surviving vehicle is on display at Marine Logistics Base Barstow in California.

Still, the concept of the torpedo-armed tank was not quite dead. In 1975, China experimentally tested torpedo-armed variants of its Type 63 amphibious tank, an up-gunned spin-off of the Soviet PT-76 at Lushun.  These unique Type 63s, conceived with a coastal-defense role in mind, had their 85-millimeter gun turrets replaced with rapid-firing twin 533-millimeter Type 7902 torpedo launchers. Despite supposedly successful testing, the fascinating if implausible program fell afoul of budget cuts.

Sébastien Roblin holds a Master’s Degree in Conflict Resolution from Georgetown University and served as a university instructor for the Peace Corps in China. He has also worked in education, editing, and refugee resettlement in France and the United States. This article first appeared in 2019 and is being republished due to reader interest.