This Massive Russian ICBM Can Nuke Any Place on Earth (Maybe) 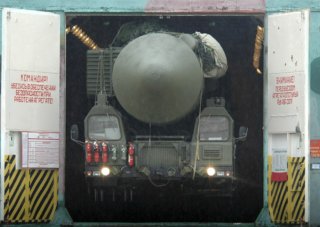 Here's What You Need to Remember: There are quite a few ifs related to the Sarmat project. It could be an incredibly long-range ICBM—if it could get off the ground. It could be one of the hardest missiles to defend against—if it can get out of missile silos properly.

Russia inherited a missile collection from the Soviet Union that is rival to none—arguably bigger in type and overall diversity than any other nation’s missile arsenal. Although some of their intercontinental missiles are beginning to show their age, their newest, the Sarmat, would be quite dangerous. It’s combination of very high range, possible hypersonic capability, and a variety of nuclear warheads would be perhaps unparalleled—if it ever becomes operational.

In his 2018 State of the Union address, Russian President Vladimir Putin announced the operational preparedness of the Sarmat intercontinental ballistic missile. The Sarmat is a liquid-fueled, silo-based replacement to the aging SS-18 Satan system.

The Sarmat is named after the “nomadic Sarmatian tribes who lived in the 6th-4th centuries BC on the territory of present-day Russia, Ukraine and Kazakhstan,” according to Tass.

Perhaps somewhat hyperbolically, President Putin said that the Sarmat’s range and speed would make it complicated to intercept using traditional missile defense. Moreover, he bragged that it could carry a broad array of nuclear warheads and could fly hypersonically (that is, Mach 5 or greater). Finally, Putin proclaimed that even the most advanced anti-ballistic missile defenses would be inadequate against it.

Indeed, at least one of those claims proved to be inaccurate—the Russian Deputy Defense Minister, Alexi Krivoruchko revised the Sarmat’s slated service entry time to 2021, which makes the Sarmat already three years behind schedule. Part of the problem was apparently a storage issue where the missile would improperly eject from the silo.

Despite the date of entry being pushed back, once the Sarmat is operational, it will be fearsome—it reportedly has a range of 18,000 kilometers, or just over 11,000 miles, which would put virtually any location on the globe within range.

It is also quite large, even by intercontinental ballistic missile standards—it weighs over 200 tons, and can carry a ten-plus ton payload.

According to a Russian media press release, President Putin said that the Sarmat would also serve as the propulsion vehicle for the Avanguard hypersonic glide missile.

Putin said that “the missile system Avangard with a hypersonic glide vehicle will considerably enhance the ICBM potential.” He also announced that “the final tests of the missile Sarmat are proceeding successfully…[towards] combat duty.”

There are quite a few ifs related to the Sarmat project. It could be an incredibly long-range ICBM—if it could get off the ground. It could be one of the hardest missiles to defend against—if it can get out of missile silos properly.

While some of what both Putin and the Russian media has said about Sarmat is likely wishful thinking that plays well to a domestic audience, there is no questioning Russia’s domination of missile technology on the world stage—especially if this latest missile proves to be workable.