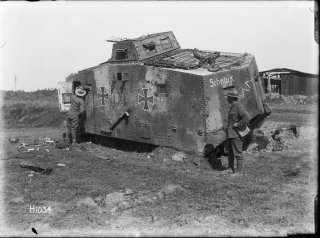 Here's what you need to remember: In some ways, the A7V may have contributed more to World War II than World War I, as evidenced by Nazi Germany’s armored tank designs of the era which were quite advanced compared to their contemporaries. Either way, the A7V makes for a fascinating piece of World War I history.

Quite a few military innovations made widespread combat debut on the various battlefields of World War I—including submarines, machine guns, airplanes, poison gas, and flamethrowers. But arguably among the most significant developments in military technology of the era was the tank.

The British fielded the first tanks in numbers during that war, sending their Mark I tank to the front lines. Though the Mark I kicked off a new era in warfare, theirs wasn’t the only tank of that war—nor was it the best.

The German Empire too fielded tanks during the Great War, and in some ways, their A7V design may have actually been better. The basic A7V design saw a large armored compartment mated to a caterpillar-type tracked chassis. Though the A7V as well as the Mark I rode on tracks, the British design saw its tracks slide unprotected over the top of the vehicle’s rhomboid shape, whereas the A7V’s track top was better protected inside the vehicle's steel armor, similar to modern tank designs.

For the era, the A7V was massive: it stood nearly eleven feet tall, over twenty-four feet long, and weighed around thirty-three tons. Corresponding to its large size, the A7V was also heavily armed. While many modern tanks today sport one or two machine guns, the A7V packed a total of six MG 08s inside its armored hull, two to a side, and two at the rear. Furthermore, the A7V sported a 57mm main gun at the front, integrated into the A7V’s front hull glacis.

Two gasoline engines propelled the A7V at speeds just above nine miles per hour, making the German tank one of the speedier tanks of the era considering its size. In addition, the A7V benefited from a spring-type suspension, aiding its cross-country capability. Despite the A7V’s engine output and suspension, the design was top-heavy and not particularly effective in off-road conditions. Several photos and videos of the A7V can be seen here and here. They give a good impression as to the A7V’s size and speed and are worth the watch.

Post-war, the A7V design saw further service in Germany during the civil unrest that roiled the country after the end of hostilities. The Freikorps paramilitary groups that proliferated after the war commandeered several A7Vs or A7V-derivatives, which may have seen some combat in the German capital in the immediate post-war era.

Of course, the German Empire did not build the A7V in sufficient numbers to turn the tide of the war in their favor—estimated A7V production numbers, around twenty, pale in comparison to the several thousand French and British tanks that saw service during World War I.

In some ways, the A7V may have contributed more to World War II than World War I, as evidenced by Nazi Germany’s armored tank designs of the era which were quite advanced compared to their contemporaries. Either way, the A7V makes for a fascinating piece of World War I history.