Merge a Battleship and Aircraft Carrier? This Is What That Looks Like. 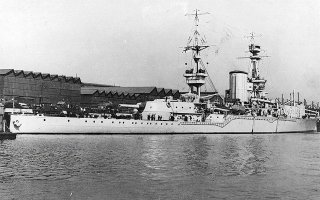 Here's What You Need to Know: The HMS Furious was an impressive ship with a good career.

The HMS Furious was originally a Courageous-class cruiser that was intended to support operations as a part of the Baltic Project, in which a large force of infantry, either British or Russian, would be landed on Pomerania, in Germany’s north, where a landing force would only be about 100 miles from Berlin. The thinking was, if the German capital could be captured, an early end to the war could be seized.

To support the Baltic Project, Furious was given huge guns. Two massive 18-inch naval guns would be installed, one at the bow, and another at the stern. These massive guns were the heaviest, largest guns ever used by the Royal Navy. They fired an 18-inch shell, which weighed over 3,300 pounds. The heavy shells could be fired a distance of 23 miles, although the shells were only accurate out to about 18 miles. Secondary armaments included a collection of 5.5-inch guns and 4-inch anti-aircraft guns. During her construction, the Baltic Project was canceled, leading to an alteration of the Furious’ design.

…And into the Air

During the Furious’ construction, modifications were made that radically altered her intended purpose. Rather than supporting amphibious operations, Furious was to carry airplanes. Her bow turret and 18-inch gun were removed, and a small flight deck was installed with space for around 10 airplanes. Her rear turret was also replaced after test-firing the 18-inch gun she was intended to carry, and exchanged for more flight deck space. This brought her flight deck count to two, one for launching planes, the other for recovering them.

Oddly, the exhaust funnel and superstructure in the center remained in place. Two narrow strips of flight deck snaked their way around the middle island, but they caused so much wind turbulence that landing on the flight deck was eventually barred.

One of her few actions during World War I was launching a handful of Sopwith Camel biplanes as an element of the Tondern raid, an attack on an Imperial German airstrip in Denmark—and the world’s first aerial attack by aircraft launched from an aircraft carrier.

After the war, the obvious shortcomings of having a funnel and superstructure in the middle of the flight deck were rectified. These island-like protuberances were removed, and she was given a new unified flight deck that was nearly as long as the hull.

During the Second World War, Furious took part in Operation Torch, the Allied invasion of North Africa in 1942, launching Supermarine Spitfires and other planes to provide air cover for the amphibious landings that were taking place on the North African coast.

After the successful Torch landings, Furious was recalled to waters closer to home, where she was to take part in Operation Tungsten, a Royal Navy mission that targeted the German battleship Tirpitz, the heaviest battleship ever built by a European navy. Tirpitz was stationed in Norway to deter Allied naval power from invading, and to intercept and destroy Allied supply convoys destined for the Soviet Union.

The first contact by Furious caught Tirpitz by surprise. Two waves of planes from Furious and other naval elements struck Tirpitz fourteen times. Despite scoring so many hits, Tirpitz did not suffer severe damage, as the British bombers released their ordinance at an altitude insufficient to give their armor-piercing bombs the necessary speed to penetrate the Tirptz’s armored deck.

Another attack later that month failed to hit Tirpitz and so was followed by several other waves of attacks against the battleship in the subsequent months. Despite scoring additional hits (one armor-piercing bomb cut through the Tirpitz’ deck, and could have caused catastrophic damage, but didn’t detonate—it was a dud), Furious was unable to sink Tirpitz.

The Proof is in the Pudding

Despite beginning life as a cruiser, then as a jury-rigged cruiser-carrier hybrid, and finally as a proper aircraft carrier, the HMS Furious was one for the history books. There’s no doubt this ship established the utility of launching planes from the sea.