Model 45A: This American Bullpup Rifle Was Almost Forgotten 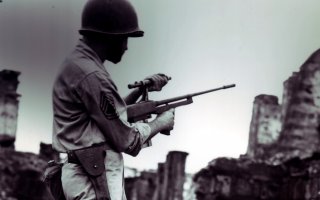 Here's What You Need to Know: The Model 45A is essentially a hybrid battle rifle/light machine gun.

As part of the U.S. Army’s Next Generation Squad Weapons (NGSW), which will replace both the M4 Carbine and M249 SAW, one option is a rifle that features a “bullpup” configuration from General Dynamics. This layout places the magazine in the stock behind the pistol group—which reduces the length of the weapon but could require some additional training for soldiers used to the legacy systems.

Today, bullpup style rifles are used by the militaries of Great Britain, France, China and Israel but the radical design hasn't been widely used by the U.S. military. However, a weapon based on a similar platform was produced and briefly tested at the end of World War II.

Meet the Model 45A, a .30 caliber bullpup that was essentially a hybrid battle rifle/light machine gun.

Interestingly, not a whole lot is actually known about why the weapon was developed, apart from the fact that the Army produced a number of prototypes, which saw limited use in the Philippines, where it is believed to have been produced. Much of what is known comes from U.S. Army Signal Corps photos, and to date, no surviving prototypes are known to exist.

Why exactly the weapon was produced there is a true mystery as the Philippines had been occupied by the Japanese military until 1944 and not fully liberated until mid-1945 shortly before the war ended. While it is possible the weapon began as a Japanese prototype that seems highly unlikely as the weapon used a standard magazine for a Browning Automatic Rifle and was thus chambered for the standard .30 caliber ammunition. The Philippines had a small but robust firearms industry before the war, so perhaps it was something actually developed before World War II broke out or was a weapon developed by the resistance fighters—but creating a new design would seem counterintuitive during an enemy occupation.

Unlike modern bullpups, which are compact weapons, the Model 45A was actually a long gun in every sense of the word as it featured a particularly long barrel. Yet, its other features seem almost “futuristic” for the mid-1940s including an integral scope/carrying handle—thus making it look similar in profile to the Austrian Steyr AUG.

The buttstock has been described as not resembling any U.S. or automatic rifle stock in use at the time, but from the U.S. Army Signal Corps photos it does appear to be made of wood. What is noteworthy is that one photo shows the weapon being examined in the Manila Ordnance Technical office in October 1945 and there are a number of Japanese mortar rounds and hand grenades on the table—which lend some credence to the idea that perhaps it wasn't an American weapon at all.

It is also worth noting that John Garand, who developed the M1 Garand, was also reported to be working on his own bullpup design in 1945 at the Springfield Armory. However, the T31 as it was known never moved beyond the prototype stage. Perhaps the bullpup concept was just too radical for the Army, something perhaps General Dynamics should have considered even seventy-five years later.