Naval Attackers Won't Stand a Chance Against the SeaRAM 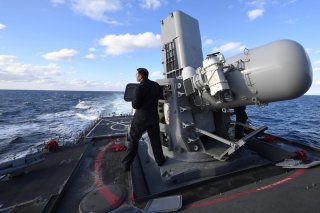 Here's What You Need to Remember: The defensive envelope for SeaRAM is significant, as it can destroy cruise missiles, enemy drones and other surface threats such as approaching vessels or small boats, Navy weapons developers explain.

The SeaRAM weapons system, designed to fire Rolling Airframe Missiles out of a Close-in-Weapons System (CIWS), is now installed on many Navy ships to include destroyers, amphibious ships and of course the Navy’s Littoral Combat Ship (LCS). The SeaRAM provides an advantage to many Navy combatants due in large measure to its self-contained system, meaning it uses its own radar, software and sensors without needing to occupy other technologies or systems on the ship. This is particularly relevant in a smaller surface combatant such as an LCS, compared with a large destroyer armed with Vertical Launch Systems for larger interceptor missiles and a broader Aegis radar infrastructure.

The SeaRAM system builds upon the infrastructure and radar of the CIWS, which has a Phalanx gun system that fires a twenty-millimeter cannon at close-in threats such as small boats. The SeaRAM is part of a layered ship-defense system designed to identify and destroy longer-range approaching enemy threats, such as anti-ship missiles, drones, small boats and helicopters.

The idea is to supplement and build upon the defensive power of the CIWS, an area-weapon that fires multiple projectiles from a Phalanx gun system to destroy approaching air and surface threats. SeaRAM increases the envelope of attacking threats a ship can defend against and hits targets at farther ranges than CIWS. Navy officials have said they are very enthusiastic about SeaRAM, as it is the kind of weapon that enables ships to operate in a higher-threat environment. Raytheon weapons developers explain that the SeaRAM massively expands the defensive envelope of the ship, enabling a longer-range Rolling Airframe Missile beyond the capacities of a CIWS gun to track and destroy multiple targets simultaneously. SeaRAM is an ability to destroy several approaching enemy attacks at one time, using an autonomous dual-mode passive radio frequency with infrared guidance, a Raytheon statement said.

The defensive envelope for SeaRAM is significant, as it can destroy cruise missiles, enemy drones and other surface threats such as approaching vessels or small boats, Navy weapons developers explain. One of the largest advantages of the weapon lies in its ability to operate an independent radar as part of a layered defense system to track and take out targets from longer ranges with more precision and coordination.

The SeaRAM missile system replaces the CIWS area-weapon with the Rolling Airframe Missile which fires from an eleven-missile battery. The CIWS, which has in recent years been upgraded by the Navy to incorporate surface as well as incoming air threats, shoots out forty-five hundred rounds per minute with a phalanx gun firing mini projectiles.

Interestingly, a Navy weapons developer once said that the SeaRAM integrates the accuracy and precision of the Rolling Airframe Missile (RAM) with the maneuverability of the CIWS’ Phalanx’s high-resolution search- and track-sensor systems designed for rapid response. The RAM is a versatile interceptor. It can fire from a SeaRAM or a Guided Missile Weapons System Mk 49 Launcher. The Mk 49 consists of a launcher and lightweight, fire-and-forget interceptor weapons.

Navy developers have been working on upgrading and refining launcher systems to expand the integration of SeaRAM missiles across the fleet. In recent years, the Navy has begun arming forward-deployed destroyers with the emerging SeaRam weapon to track and potentially destroy attacking enemy missiles, drones, aircraft, small boats and other threats.

Navy officials have also said that SeaRAM could be integrated onto its now-in-development fleet of Constellation-class frigates, although the exact weapon configuration of the frigates has yet to be determined.