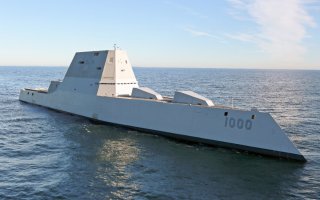 Here's What You Need to Remember: The Zumwalt-class was introduced in 2013 as a line of modern guided-missile destroyers with stealth capabilities, boasting the bespoke Long Range Land Attack Projectile (LRLAP) system. But the project encountered no shortage of design and procurement challenges, with LRLAP development facing termination in 2016.

The new Zumwalt-class destroyers will be the first U.S. Navy vessels to receive a key hypersonic upgrade, according to the military.

Chief of Naval Operations Adm. Mike Gilday announced earlier this week that the Navy will debut its first at-sea hypersonic missiles on one of the service’s three Zumwalt-class destroyers “by 2025,” as first reported by USNI News.

Gilday’s announcement upended widespread expectations that the Navy’s Virginia-class cruise missile submarines and Ohio-class guided-missile submarines were first in line to receive the upcoming missile. “Our biggest [research and development] effort is in hypersonics—to deliver that capability in 2025 on a surface ship and then on Block V [Virginia-class] submarines,” he added.

The upcoming weapon is being developed from the Conventional Prompt Strike (CPS) program, a U.S. Navy effort that aims to procure a hypersonic missile that can hit any target in the world in less than an hour. As described by the Congressional Research Service, the prospective missile “would not only allow the United States to pursue an adversary without relying on forward bases, it would also allow the United States to reach targets deep inside an enemy’s territory if that area were out of the range of U.S. forces deployed at bases or on naval forces in the region.” With rapid launch times, speeds exceeding Mach 5, and a reported accuracy of six inches within target location, the upcoming hypersonic missile can credibly threaten critical enemy assets and infrastructure in high-intensity environments.

The military anticipates that the CPS program will enhance Washington’s conventional deterrent and power projection capabilities against its Russian and Chinese competitors, both of which are actively procuring hypersonic weapons capabilities. The fitting mechanism remains unclear, though the Navy has previously reviewed plans to replace the Zumwalt-class destroyer’s 155-millimeter gun mounts with multiple all-up-round canisters to accommodate the new hypersonic weapon.

Gilday added that the Navy is actively investing in directed energy weapons development to mitigate surface ships’ vulnerability to certain types of advanced missile threats. “I think directed energy with respect to the future survivability of the fleet is really important,” he said. “If you think about the fact that a Ford-class carrier generates three times the electrical power of a Nimitz-class, or that we’ve got excess power generation in Zumwalt-class destroyers.” The Zumwalt line’s advanced integrated power system can feasibly generate the electricity required to power this technology.

The Zumwalt-class was introduced in 2013 as a line of modern guided-missile destroyers with stealth capabilities, boasting the bespoke Long Range Land Attack Projectile (LRLAP) system. But the project encountered no shortage of design and procurement challenges, with LRLAP development facing termination in 2016. Mounting costs and looming sustainability concerns prompted the Navy to revise its long-term plans for its new destroyer class, repurposing its three Zumwalt ships—USS Zumwalt, USS Michael Monsoor, and the upcoming USS Lyndon B. Johnson—as blue-water strike platforms. The CPS weapon upgrade is slated to become a key part of those efforts, reinvigorating the troubled Zumwalt line with a newfound battlefield identity.