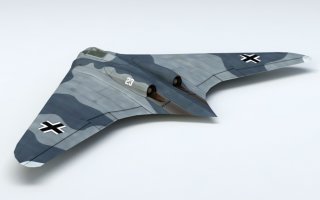 Here's What You Need to Know: The futuristic-looking jet fighter was an interesting early exercise in both delta wing and flying wing design.

The German Horten brothers, Reimar and Walter, were amateur airplane designers and flight enthusiasts. During Europe’s inter-war years, they came to prominence in Germany for their involvement in the country’s glider scene. After the First World War, Germany had been limited in what kinds and numbers of planes they were allowed to build. Gilders, however, were not restricted by the terms of the Treaty of Versailles, which ended the war.

Glider clubs became the training ground for the budding pre-war German air force—and the Horten brothers’ designs excelled. They marched to the beat of a different drummer and were known for building rather unconventional designs.

After the Second World War, a number of prominent Nazis sought refuge overseas, sometimes in Latin America. Reimar Horten was one of these. Building upon the brothers’ glider and flying wing success, Reimar tried his hand at another flying wing design—but this time for Argentina.

Like the Horten brothers’ other prototypes, initial models were made of wood to test the aerodynamics of the design. By using small-scale wooden models, the I.Ae. 37’s general characteristics could quickly and cheaply tested. This stage of testing was crucial, as the flying characteristics of delta wing designs in general—and flying wing designs specifically—were relatively unknown, though a few flying wings had already been built and flown.

After wind tunnel testing, the design was validated and work began on a larger scale model—still made of wood—though the larger model lacked engines, as had many of the Horten brothers’ earlier designs. In order to test the flight characteristics at speed, the I.Ae. 37 prototype was towed behind a larger, motorized airplane.