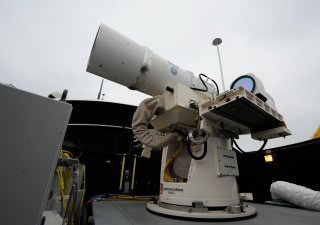 Here's What You Need to Remember: Also, lasers could, in some instances, enable surface warships to encroach on enemy positions given that deck-mounted guns could be supplemented by laser weapons capable of attacking at the speed of light and pinpointing narrow target areas with precision-guidance technology.

The Navy is moving quickly to arm its growing fleet of destroyers with a variety of scalable, high-powered lasers intended to incinerate enemy drones, helicopters and fixed-wing targets. These destroyers will intercept incoming anti-ship missiles and even perform surveillance optics and targeting for ship-mounted weapons systems.

Ship-fired lasers can introduce an entirely new, and highly impactful, tactical advantage to U.S. Navy warship offensive and defensive operations. Of course, they cost less than expensive interceptor missiles but they are also inherently scalable, meaning they can be tailored to either disable or destroy targets.

Should an incoming enemy anti-ship missile be traveling over heavily trafficked ocean areas, then a kinetic “explosion” dispersing fragments would likely cause civilian casualties. A laser weapon, however, can simply incinerate the target with much less fragmentation and explosive “energetics.”

The Navy is integrating on its ships a laser system called HELIOS, an acronym that stands for High-Energy Laser with Optical-dazzler and Surveillance. It has added the system to DDG-51 destroyers, which can use the offensive and defensive weapons capability. Lasers like HELIOS provide these destroyers with a substantial optical component, meaning they can act as a sensor to track targets and help with necessary surveillance missions. Also, lasers could, in some instances, enable surface warships to encroach on enemy positions given that deck-mounted guns could be supplemented by laser weapons capable of attacking at the speed of light and pinpointing narrow target areas with precision-guidance technology.

Speed is increasingly vital to ocean warfare. New technologies are entering the sphere of Naval warfare all the time, greatly changing the tactical equation. That is why the Navy’s much-discussed Distributed Maritime Operations calls for a more dispersed, yet networked fleet able to leverage a new generation of long-range sensors and weapons.

“Ubiquitous and persistent sensors, advanced battle networks, and weapons of increasing range and speed have driven us to a more dispersed type of fight . . . keeping ahead of our competitors requires us to rapidly field state-of-the-art systems,” CNO Adm. Michael Gilday noted in the document. “Speed matters.”