Need a Tank? Russia's T-14 Armata Tank is Officially On the Market 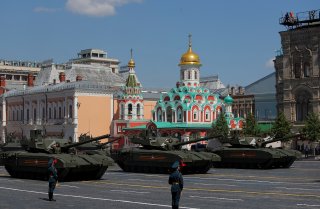 Here's What You Need To Remember: The tank is notable for its automated systems, including substantial assistance with aiming.

This week Rostec, the Russian state-owned high-tech conglomerate, announced that it will start delivery of the “world’s best” tank beginning next year. The Russian military has eagerly anticipated the delivery of the latest T-14 “Armata” like a child waiting for Christmas, and now it seems that serial deliveries of the next-generation tank will begin in 2021, according to Rostec chief Sergei Chemezo.

“Serial deliveries of the T-14 tank based on the Armata platform will begin in 2021,” Chemezo told Tass, while boasting of the platform. “This is, undoubtedly, the world’s best tank today. In the future, this vehicle will become the main battle tank in the Russian Army.”

Like Christmas too, it has been a long time coming—and Russia could soon be a gift giver to the militaries of the world next year.

In 2019, Moscow formalized the necessary documents for the export of the Armata main battle tank (MBT).

“We are advertising this tank to foreign customers,” Chemezov added. “This year, it was demonstrated ‘live’ at the Army forum: visitors could come up to it, take a picture of it and touch it. It is a pity it has been impossible to demonstrate it abroad yet due to the absence of foreign exhibitions.”

Earlier this year it was hinted that Russia was also working on an unmanned version of the T-14 MBT. However, according to the report from Tass, the uncrewed version of the tank won’t be serial-produced and instead will be designed for testing unmanned technologies for other land-based robotic systems. Russia’s Kalashnikov Group is currently developing ground combat autonomous systems—or robots—and those have already been employed in field testing in Syria.

“A number of our other enterprises are working on developing such systems,” said Chemezov. “Even the Armata was tested as an unmanned tank. Of course, this will not be a serial-produced vehicle. We are testing unmanned technologies on it.”

While it won’t be fully autonomous, the T-14 MBT still has a number of automated features. Among the T-14’s innovative characteristics is its unmanned turret, which includes a remotely controlled 125-millimeter 2A82-1M smoothbore main gun with a fully automated loader. The driver, gunner and tank commander are housed in a crew compartment that is located in an armored capsule at the front portion of the hull, isolated from the automatic loader as well as the ammunition storage in the center of the tank.

In addition to loading the gun, the automated systems will help it track and lock on to a target.

“The Armata crew does not need to aim accurately,” explained Chemezov. “It only has to aim the gun roughly. Electronics will do all the rest: it will accurately determine the distance to the target and aim the gun at it. That is, the vehicle uses artificial intelligence elements that help the crew deliver fire.”

According to Rostec, the targeting algorithm has already been used in the combat robots that were deployed to Syria. This is likely the Uran-9 robot tank, a diminutive remote-controlled armored vehicle that has been noted for its formidable guns and missile armament. The platform reportedly underwhelmed in field testing and it is clear much work has to be done. However, it highlighted that efforts to build remote-controlled robotic weapons platforms are increasingly becoming a reality of the twenty-first-century.