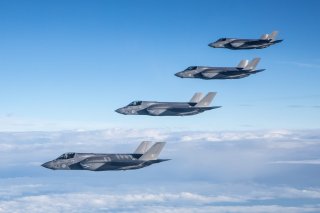 Here's What You Need to Remember: The F-35 jet is on track to become one of the world’s most numerous jet fighter aircraft, spurring the retirement of many currently-serving aircraft along the way. And considering countless data points that prove it has no rival in the sky, the U.S. military is well-positioned for decades to come as the era of great power competition becomes even more intense.

As serial deliveries of the F-35 fifth-generation stealth fighter continue en masse, the face of a new U.S. military begins to take shape.

The U.S. Air Force reported last month that, following fourteen serial production lots, the service now has more F-35 jets than either F-15 Eagles or A-10 Thunderbolt II attack aircraft. At 283 models in service, the F-35 jet is now Air Force’s second-most numerous jet fighter after the F-16 Fighting Falcon. These numbers are expected to shift in coming decades, as the conventional takeoff and landing variant of the F-35 jet—the F-35A—continues to replace currently-serving F-16 units.

Why the F-35 Is Desperately Needed

Despite its several iterations, the Fighting Falcon is increasingly verging on obsolescence after forty-two years of service; though it can still fulfill some battlefield roles, the F-16 is increasingly showing its age against the sophisticated air defenses and air-to-air capabilities being rapidly acquired by the Russian and Chinese militaries. With its class-leading stealth performance, sensor fusion capabilities, large payload potential, and vast suite of electronic warfare tools, the F-35 jet can counter the sophisticated threats posed by America’s major adversaries in ways that the Fighting Falcon cannot.

Russia and China Should Worry: The F-35 Will be the Stealth Spine of the U.S. Military

But the story of what is the largest procurement program in U.S. military history doesn’t end here. The F-35A jet is only one of three distinct models being acquired by the U.S. military. The Marine Corps’ F-35B jet is a short takeoff and vertical landing variant of the fighter, designed to completely replace the service’s aging stock of F/A-18 Hornet fighters as they approach their planned sundown date of 2030. The F-35B jet is also slated to replace the Marines’ McDonnell Douglas AV-8B Harrier II attack aircraft, of which eighty are currently in service, into the mid-2020s. The Harrier II platform has had its service life cut short after proving increasingly cost-inefficient to maintain; a similar story is playing out for the aging Hornets, with the Marine Corps estimating that the service can save as much as $1 billion by replacing its F-18 jets with F-35 jets at a faster pace than previously planned.

Finally, the F-35C is a catapult-assisted take-off but arrested recovery variant that boasts a series of design changes allowing it to operate from aircraft carriers. The Navy’s ongoing F-35 orders are a major part of the service’s efforts to gradually replace its roster of over five hundred Boeing F/A-18E/F Super Hornet fighters, which are increasingly undermining the ability of U.S. carrier wings to effectively project power in certain high-risk environments. With an unrefueled combat range of just under 400 nautical miles, the carriers deploying these aircraft are putting themselves within striking distance of a growing number of advanced Russian and Chinese anti-ship missiles, including the hypersonic 3M22 Tsirkon from the former and DF-17 from the latter. Boasting a combat radius of 670 nautical miles, the F-35C jet ensures a greater degree of operational flexibility and provides substantially improved chances of being deployed at a safer range.

The F-35 jet is on track to become one of the world’s most numerous jet fighter aircraft, spurring the retirement of many currently-serving aircraft along the way. And considering countless data points that prove it has no rival in the sky, the U.S. military is well-positioned for decades to come as the era of great power competition becomes even more intense.