North Korea Has 4,300 Tanks But How Many Are Ready for War? 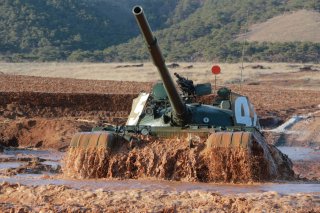 Here's What You Need to Remember: During its October 2020 parade in celebration of the 75th anniversary of the founding of its ruling party, North Korea unveiled a new model of main battle tank. The new tank bears little resemblance to other domestically produced North Korean tanks and instead appears to have more in common with recent Russian and Chinese models.

While North Korea’s growing arsenal of nuclear weapons and ballistic missiles garners quite a bit of attention, the DPRK’s conventional military often gets overlooked. The Korean People’s Army (KPA) remains one of the world’s largest standing militaries, number roughly 1.3 million active-duty personnel, more than double the number fielded by the South Korean military. Despite its numerical advantage, North Korea’s armed forces face a significant qualitative deficiency when compared to the armed forces of both the United States and South Korea. This situation is well exemplified by North Korea’s inventory of tanks and armored vehicles.

According to the South Korean Ministry of National Defense, North Korea operates roughly 4,300 main battle tanks, a significant advantage over the 2,300 main battle tanks operated by the South Korean military. Most of the KPA’s armored force, however, is comprised of outdated Soviet-era tanks, including the T-34, T-54, T-55, T-62, and the Chinese Type-59. Some of these models date back to the aftermath of the Korean War, and would likely be of limited combat value today as many are in various states of disrepair.

North Korea’s own domestically produced tanks also appear to be based on older Soviet or Chinese designs. North Korea’s Chonma-ho, which first entered into production in the 1980s, is largely a copy of the 1960s era Soviet T-62. The Chonma-ho has seen several upgrades since its initial unveiling, with later models equipped with larger main guns and improved explosive-reactive armor.

The Pokpung-ho, a more recent addition to North Korea’s armored forces that was first seen in 2009-10, appears to be a North Korean attempt to produce a 1970s era Soviet T-72 type tank utilizing T-62 technology.

North Korea’s lack of a modern armored force reflects the DPRK’s long-held approach to military modernization. Since the 1960s, North Korea has prioritized the development and modernization of those capabilities that it believes provide it with the largest strategic benefit at the lowest possible cost, in keeping with the country’s financial and resource constraints. This has manifested itself in North Korea’s pursuit of a wide array of asymmetric military capabilities including ballistic missiles, cyber tools, and a large special operations force, with the Department of Defense assessing that North Korea emphasizes developments in areas where it sees a possibility for some relative advantage over its adversaries.

Even so, North Korea has continued to invest resources into its armored forces. During its October 2020 parade in celebration of the 75th anniversary of the founding of its ruling party, North Korea unveiled a new model of main battle tank. The new tank bears little resemblance to other domestically produced North Korean tanks and instead appears to have more in common with recent Russian and Chinese models.

In the event of a major conflict on the Korean Peninsula, North Korea is likely to pursue an early termination of the conflict before the U.S. and South Korea can effectively bring their full military power to bear and before the United States can introduce follow-on forces to the peninsula. In such a scenario, North Korea would likely attempt to inflict significant physical and phycological damage on U.S.-ROK forces and the civilian population, with the KPA’s armored forces would form an important element of any early North Korean offensive.