Not All Democrats Are Satisfied With Biden’s Student Loan Pause 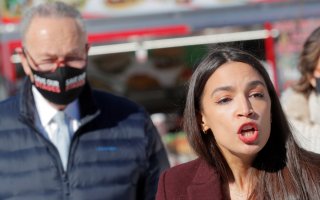 Here's What You Need to Know: The Federal Reserve estimates that Americans collectively owe $1.7 trillion in student loans.

Secretary of Education Miguel Cardona issued a statement on the pause’s extension. The statement noted that the pause had “been a lifeline that allowed millions of Americans to focus on their families, health, and finances instead of student loans during the national emergency."

“As our nation’s economy continues to recover from a deep hole, this final extension will give students and borrowers the time they need to plan for restart and ensure a smooth pathway back to repayment," Cardona said in the statement.

The four-month extension is a major victory for debt-relief advocates, including many Democrats in the party’s progressive wing, who had pressured President Joe Biden to extend the moratorium during the new surge of coronavirus cases.

The moratorium on federal student loan payments began in March 2020, which is when a provision pausing payments through September 2020 was included in the CARES Act—better remembered for its distribution of $1,200 stimulus checks to most American adults. The Act also lowered interest rates on the payment to 0 percent for the same time period.

In September, as the moratorium was scheduled to expire, then-President Donald Trump extended it to January 31 via executive order. Biden extended the pause until September 30 after he entered office.

Crucially, these pauses only affect public student loans. Many loans are privately held, owed to private companies rather than the federal government, whose right to declare a moratorium on the repayment of private loans has been hotly debated.

While supporters of debt relief have celebrated the extension, many have pressed Biden for further changes. Senate Majority Leader Chuck Schumer (D-NY), Sen. Elizabeth Warren (D-MA) and Rep. Ayanna Pressley (D-MA) urged Biden to cancel $50,000 in debt for every student in the United States in a joint statement. The duo argued that such an action would decrease economic inequality and disproportionately benefit minority students.

Biden has historically not supported the $50,000 proposal but has indicated that he would support a $10,000 decrease—a proposal that has failed to satisfy many debt-relief advocates on Capitol Hill.

The Federal Reserve has estimated that Americans collectively owe $1.7 trillion in student loans, and many are incapable of paying, spurring calls for a bailout.