Nuclear War Between India and Pakistan Would Endanger the Entire World 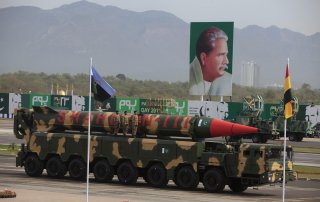 Here's What You Need to Remember: Taken together, these outcomes mean even a “limited” India-Pakistan nuclear war would significantly affect every person on the globe, be they a school teacher in Nebraska, a factory worker in Shaanxi province or a fisherman in Mombasa.

The two states, which have retained an adversarial relationship since their founding in 1947, both deploy nuclear warheads that can be delivered by land, air and sea.

Such assessments are not only shockingly callous but shortsighted. In fact, several studies have modeled the global impact of a “limited” ten-day nuclear war in which India and Pakistan each exchange fifty 15-kiloton nuclear bombs equivalent in yield to the Little Boy uranium bomb dropped on Hiroshima.

Recurring terrorist attacks by Pakistan-sponsored militant groups over the status of India’s Muslim-majority Jammu and Kashmir state have repeatedly led to threats of conventional military retaliation by New Delhi.

The Little Boy bomb alone killed around 100,000 Japanese—between 30 to 40 percent of Hiroshima’s population—and destroyed 69 percent of the buildings in the city. But Pakistan and India host some of the most populous and densely populated cities on the planet, with population densities of Calcutta, Karachi and Mumbai at or exceeding 65,000 people per square mile. Thus, even low-yield bombs could cause tremendous casualties.

Moreover, these projected body counts omit the secondary effects of nuclear blasts. Many survivors of the initial explosion would suffer slow, lingering deaths due to radiation exposure. The collapse of healthcare, transport, sanitation, water and economic infrastructure would also claim many more lives. A nuclear blast could also trigger a deadly firestorm. For instance, a firestorm caused by the U.S. napalm bombing of Tokyo in March 1945 killed more people than the Fat Man bomb killed in Nagasaki.

The civil war in Syria caused over 5.6 million refugees to flee abroad out of a population of 22 million prior to the conflict. Despite relative stability and prosperity of the European nations to which refugees fled, this outflow triggered political backlashes that have rocked virtually every major Western government.

Should bombs beginning dropping, poorer citizens many begin pouring over land borders such as those with Afghanistan and Iran for Pakistan, and Nepal and Bangladesh for India. These poor states would struggle to supports tens of millions of refugees. China also borders India and Pakistan—but historically Beijing has not welcomed refugees.

Radioactive fallout would also be disseminated across the globe. The fallout from the Chernobyl explosion, for example, wounds its way westward from Ukraine into Western Europe, exposing 650,000 persons and contaminating 77,000 square miles. The long-term health effects of the exposure could last decades. India and Pakistan’s neighbors would be especially exposed, and most lack healthcare and infrastructure to deal with such a crisis.

Studies in 2008 and 2014 found that of one hundred bombs that were fifteen-kilotons were used, it would blast five million tons of fine, sooty particles into the stratosphere, where they would spread across the globe, warping global weather patterns for the next twenty-five years.

The particles may also deplete between 30 to 50 percent of the ozone layer, allowing more of the sun’s radiation to penetrate the atmosphere, causing increased sunburns and rates of cancer and killing off sensitive plant life and marine plankton, with the spillover effect of decimating fishing yields.

Taken together, these outcomes mean even a “limited” India-Pakistan nuclear war would significantly affect every person on the globe, be they a school teacher in Nebraska, a factory worker in Shaanxi province or a fisherman in Mombasa.

Sébastien Roblin holds a master’s degree in conflict resolution from Georgetown University and served as a university instructor for the Peace Corps in China. He has also worked in education, editing, and refugee resettlement in France and the United States. He currently writes on security and military history for War Is Boring. This article was first published in 2019.