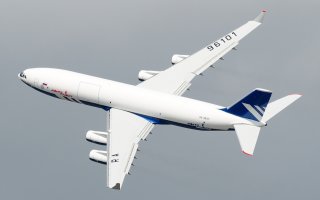 Here's What You Need to Know: It is unclear when the new plane will actually enter service.

In early 2016 the Russian government announced it would build a third-generation Airborne Command Post that would be operated by the Russian Air Force and based on the Illyushin II-96-400 wide-body commercial aircraft airframe. The first of these was apparently delivered on August 1, 2016, but it is unclear if had actually entered service, as Russian media has noted the older IL-80 version of the so-called “Doomsday Plane” was still in general use.

Either way, it seems that the Airborne Command Post is now getting a further update. Tass reported in October 2020 that the newest Doomsday Plane will be built on the II-96-400M modernized version of the quadjet airframe. It will offer a much greater range than the aging IL-86, which was developed in the late 1970s and only first entered service at the end of 1980.

While more than 100 of the IL-86 airframes were constructed, as of 2012, only four of the aircraft remained in service and all with the Russian Air Force in the Airborne Command Post configuration. With this news it could be the end of the line for those four places.

“It is scheduled to replace it with an Il-96-400M. It will allow to significantly increase the period of airborne combat duty and to extend the radius for troop command,” a Russian aircraft industry source told Tass.

The Russia-based United Aircraft Corporation (UAC) has said that the first flight of the IL-96-400M should take place in 2021, but it is unclear when the new Russian “Doomsday Plane” will actually enter service.

Maintaining Continuity in the Sky

Airborne Command Posts, which received the gallows humor-worthy nicknames in the United States during the Cold War, were originally designed for use in the event of an apocalyptic event such as a nuclear war or other major disaster that would destroy ground-based command infrastructure.

The United States operates the E-4B Advanced Airborne Command Post, which is a militarized version of the Boeing 747-200, four-engine, swept-wing, long-range high-altitude airplane that is capable of refueling in flight. The E-4 took over the mission of the EC-135 flying command post aircraft in 1974, and by the mid-1980s all had been updated to the B models. All E-4B aircraft are assigned to the 595th Command and Control Group at the Offutt Air Force Base, Nebraska, which is aligned under the Eight Air Force.

The E-4B aircraft carry thirteen external communications systems and are designed for missions lasting seventy-two hours. At least one plane is always on twenty-four-hour alert, seven-days a week with a global watch team at one of many selected bases throughout the world. The National Airborne Command Operations Center (NAOC) operations team, which mans the aircraft, is made-up of joint personnel including Airmen, Soldiers, Sailors and Marines with a variety of specialties.

In addition to the E-4B, the U.S. Navy also operates the E-6B Mercury, which is based on a 707 airliner. Its main purpose is to maintain the communication link between the national command authority (starting with the president and secretary of defense) and U.S. nuclear forces, even if ground-based command centers are destroyed by an enemy first strike. The E-6 fleet is based at Tinker Air Force Base, Oklahoma, and operated by Fleet Air Reconnaissance Squadron 3 (VQ-3), VQ-4, and VQ-7.