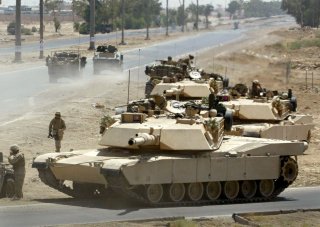 Key point to remember: A new M-1 costs more in absolute terms than a new M-48 did 70 years ago. But it’s also true that the M-1 has an extensive, and successful, combat record stretching back to the 1991 Gulf War.

Pierre Sprey was a member of the Pentagon team that, back in the 1970s, helped to write the requirements for the iconic A-10 attack plane.

Sprey’s advocacy of the tough, hard-hitting A-10 helped to make him famous in military-technology circles. The A-10 after all remains one of the world’s most effective close-air-support aircraft, more than 40 years after it entered service.

But some of Sprey’s other ideas are less broadly appealing. In a 2007 presentation that circulated on-line in April 2020, Sprey compared the U.S. Army’s current M-1A2 tank with the M-48, ground-combat branch’s main tank from the 1950s.

The M-48 is the better tank, Sprey insisted. Readers reacted with shock and disbelief.

The M-1, Sprey claimed, must spend an hour refueling for every three hours it runs, plus another hour having its filters cleaned for every two hours of operations.

The M-1’s machine guns “can’t depress to sweep roadside ditches,” Sprey wrote. The smaller but taller M-48 carries twice as many machine-gun rounds as the M-1 does and can “sweep ditches with machine guns.”

Luke O’Brien, a U.S. Army reservist and historian, pointed out what he saw as flaws in Sprey’s reasoning. “Operational mobility isn’t just a function of fuel,” O’Brien wrote. “That same mobility doesn’t mean a damned thing if you arrive with a vehicle that isn’t worth a damn.”

“The real issue is what works in combat and what does not,” Sprey claimed. “High cost and complexity usually doesn’t work.”

It’s true that, at millions of dollars per copy, a new M-1 costs more in absolute terms than a new M-48 did 70 years ago. But it’s also true that the M-1 has an extensive, and successful, combat record stretching back to the 1991 Gulf War.

While the M-1 has proved vulnerable to roadside bombs, it also has proved highly effective in tank-on-tank combat. It’s not clear the M-48 would fare better against improvised explosive devices. It’s much less clear that the M-48 reliably could beat modern tanks in direct combat.

M-48s and their variants, including newer M-60s, remain in service with several armies. Turkey has deployed M-48s and M-60s in combat in Syria. Islamic State missileers destroyed several of them.

Sprey made several other controversial comparisons in his 2007 presentation. He claimed a World War II destroyer with its torpedoes was a better surface combatant than a larger cruiser lacking torpedoes.

And of course he compared the A-10 to the F-15E fighter-bomber, concluding that the faster-turning A-10 was the better close-air-support platform.