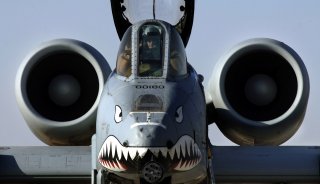 The U.S. Air Force in its 2021 budget proposal asked Congress to let it retire 44 of its roughly 280 A-10 Warthog attack jets. It’s the second time in recent years that the flying branch has tried to slash the A-10 fleet.

It’s fair to say that, in the 2020s, budget appropriations are the biggest threat to the low-flying Warthog. Thirty years ago, the threat was very different.

The A-10 force in recent years has performed well in Iraq, Afghanistan and Syria, devastating lightly-armed insurgents and saving scores of American and allied lives. The Air Force lost just one Warthog to enemy fire, in Iraq in 2003.

During the Cold War, on the other hand, Air Force planners expected A-10s to suffer heavy casualties in any serious fight. The Air Force acquired the subsonic, twin-engine plane in the 1970s and 1980s in order to destroy Soviet tanks.

In the 1980s the Air Force planned to deploy 68 A-10s to each of six Forward Operating Locations in West Germany in the event of war with the Soviets. The twin-engine A-10s, with their 30-millimeter guns and Maverick missiles, were NATO’s main tank-killing weapon.

According to a 2014 article in Combat Aircraft magazine, the flying branch predicted that, if the A-10s went into action, seven percent of the jets would be lost per 100 sorties. Since each pilot was expected to fly at most four missions per day, each base would in theory generate more than 250 sorties daily.

At this pace, a seven-percent loss rate per 100 flights equaled at least 10 A-10s shot down at each FOL every 24 hours — and that’s being conservative.

At that rate, in less than two weeks the entire A-10 force at the time — around 700 jets at the time — would have been destroyed and the pilots killed, injured, captured or, at the least, very shook up.

In the brutal calculation of Cold War planning, it was perhaps worth it to expend an entire warplane fleet and all its pilots “in pursuit of the destruction of several hard-charging Soviet armored divisions,” in the words of University of Kentucky professor Rob Farley.

If the Air Force were to face a high-tech foe today, the math would probably be different. It’s unlikely the Pentagon could justify sacrificing hundreds of pilots against anything short of a truly existential threat. And for that reason, Farley wrote that he was ambivalent about the A-10's future.

Despite its popularity with ground troops, in 2013 the Air Force proposed to retire all A-10s in order to free up around $5 billion for other investments. Lawmakers blocked that proposal, compelling the service to move ahead with a wide range of upgrades meant to keep the Warthog relevant into the 2030s.

But in again putting the A-10 on the chopping block, the Air Force is assuming it won’t ever fight anything short of a full-scale war against a peer enemy. Do we really believe the era of low-intensity wars has ended?