Pipelines to Pipedreams: Is TurkStream on the Brink of Failure? 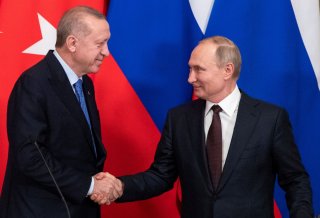 Here's What You Need to Remember: The South Stream project was consolidated into TurkStream, the Kremlin’s effort to recoup its losses through a firmer foothold in the Turkish energy market

The TurkStream pipeline was launched in 2020 to replace the failed South Stream initiative but is now in danger of suffering a fate similar to its predecessor.

Decades before the 2014 Euromaidan and the present crisis in relations between Russia and the West, the Kremlin has long had to grapple with one of the core challenges of Russian policy: how to transit natural gas into Europe as cheaply and reliably as possible. The Kremlin’s early answers to this question came in the form of the Nord Stream and South Stream pipelines. The former connects the far-western Russian town of Vyborg to Lubmin, a coastal commercial hub to Germany’s north. The latter went through Russia’s side of the Black Sea into the Balkans, where it would split off in two directions that eventually took it to Italy and Austria. Nord Stream was quickly approved and is now on the verge of being expanded—over the strenuous protest of the Trump administration and several other NATO members—with two additional lines. South Stream, however, faced a constant cycle of delays and beleaguered renegotiations from 2008 to 2013.

Then came the 2014 Ukrainian Revolution, followed by Russia’s annexation of Crimea. With relations between Moscow and Ukraine at their nadir, Russia redoubled its prior efforts—of which Nord Stream was one—to find alternative routes for gas lines that previously crossed Ukraine. Russian energy giant Gazprom identified Turkey as an ideal candidate for providing pathways into Europe in lieu of Ukraine, but the European Parliament and European Commission rushed to kill South Stream amid worsening relations between Russia and the EU. Russia withdrew the project in December 2014, following an EU pressure campaign against South Stream’s European partners. “We see that obstacles are being set up to prevent its fulfillment,” said Russian president Vladimir Putin while on a state visit to Turkey. “If Europe does not want to carry it out, then it will not be carried out.”

Putin added that South Stream’s demise will prompt Russia to “re-concentrate our energy resources on other regions of the world,” but the Kremlin didn’t have to venture very far. The South Stream project was consolidated into TurkStream, the Kremlin’s effort to recoup its losses through a firmer foothold in the Turkish energy market. There was a secondary, no less important goal: diverting Russia’s gas exports into southeast Europe away from Ukraine-connected routes. For Russia, there is an obvious strategic rationale in shifting its natural gas flows away from Ukraine at a time of unprecedented hostilities between the two states. There are also prospective economic benefits: a pipeline connecting Russia to the Balkans directly through Turkey reduces transit payments, not just to Ukraine but also to Moldova, Romania and Bulgaria.

Although couched in sound geostrategic reasoning, TurkStream has encountered no shortage of obstacles since its inception in late 2015. TurksStream negotiations were frozen in November 2015 after a Russian Su-24M was shot downnear the Turkish-Syrian border. Following a long series of crisis negotiations between Ankara and Moscow—which found themselves on different sides of the ongoing Syrian Civil War—TurkStream was reinstated in the summer of 2016. The pipeline was fully constructed in 2019, and inaugurated in the following year.

The opening of Turkstream was hailed in Moscow as a triumph of Russian economic strategy. One year later, the project has only generated dubious successes that have come at steep costs. After one year, Serbia still has not completed its section of TurkStream; according to the latest estimates, this will not happen until mid-2021. One of the core strategic aims behind TurkStream was to divorce Ukraine from Russia’s natural gas exports to southeast Europe. However, a new study by Russia’s Institute for Natural Monopolies Research (IPEM) contends that it is impossible to cut Ukraine out of Russia’s natural gas routes with present levels of demand from Europe; even as late as 2035, IPEM projects that as much as forty-one billion cubic meters of Russian natural gas will have to pass through Ukraine. Further still, it is increasingly clear that the project is slated for economic failure: according to experts, the pipeline will take around forty-seven years to become profitable.

The pipeline is underperforming partly due to the vastly different priorities of its two operators. For Moscow, the pipeline is a vital means of transferring its gas to European markets. Ankara, meanwhile, sees TurkStream as merely another opportunity to diversify its already-large portfolio of gas import options. Over the past several years, Russia’s natural gas transits to Turkey have consistently dwindled in relation to Azerbaijan and Iran—TurkStream has not reversed this trend. In what is the latest blow to TurkStream, the Nagorno-Karabakh conflict has further reinforced Turkish-Azerbaijani ties while straining the already-difficult relationship between Moscow and Ankara. In keeping with recent Turkish foreign policy behavior, Ankara will likely shift its energy imports away from Gazprom and toward Baku; it may also take steps to widen its share of liquefied natural gas imports from Qatar and Algeria, further diversifying away from Russia. Beyond Turkey’s borders, TurkStream is being undercut by the EU’s competing Southern Gas Corridor, which establishes a major natural gas route from Azerbaijan to Southern Europe through Turkey.

TurkStream has proven to be only as resilient as the Russian-Turkish relationship itself. As Moscow enters what appears to be a period of renewed competition with Ankara, the future of Russian gas exports into southeastern Europe hangs in the balance.