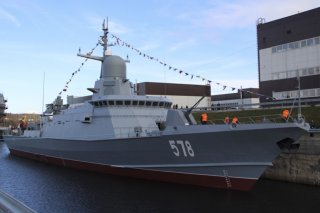 Here's What to Remember: Six of the Karakurt-class missile corvettes will join the Baltic Fleet Navy.

The Russian Navy’s Baltic Fleet will soon receive a series of six Project 22800 small missile ships, which are being built at the Pella Shipyard. Four of those corvettes will carry the seaborne Pantsyr surface-to-air missile systems and this includes the Odintsovo, which began its state trails at the Baltic Fleet’s naval ranges.

According to Russian state media, currently, two Project 22800 ships, the Mytishchi and the Sovetsk, are operational in Russia’s Baltic Fleet, while the Odintsovo is the first Project 22800 ship to be outfitted with the Pantsyr-M anti-aircraft missile/artillery system, which is the seaborne version of the Pantsyr-S land-based surface-to-air missile/gun launcher.

A total of eighteen warships from Project 22800 are planned for the Russian Navy, and these are also armed with Kalibr-NK cruise missiles and also with the modernized AK-176MA 76.2mm artillery system. The corvettes’ endurance is fifteen days.

Six of the Karakurt-class missile corvettes will join the Baltic Fleet Navy Command-in-Chief Nikolia Yevmenov announced in a patriotic message to mark Baltic Fleet Day in May. Four of those will be armed with the Pantsir-M system. It can be used to target and destroy helicopter gunships, assault jets, cruise, and anti-ship missiles. The weapon platform can further enable the corvette to take down all air targets within a radius of twenty kilometers.

Project 22800 is just the latest effort by Russia to replace its aging warships with newer, smaller, faster, and more agile systems—and to protect Russia’s interest in the region. Since the founding of St. Petersburg in 1703, the city has been Russia’s Window to Europe, serving not only as a seaport but also as a base for the Czar Peter the Great’s navy.

The land-based Pantsyr-S system is a short-range weapon designated to strike air targets with automatic anti-aircraft guns and missiles with radio-command guidance and infrared and radar tracking. In addition, the weapon combines the multi-channel target acquisition and tracking system and the missile/artillery armament designated to strike targets at an altitude of up to fifteen kilometers and within a range of twenty kilometers. It further utilizes two rapid-firing thirty-millimeter autocannons with a dozen SAMs.

A battalion set of Pantsyr-S surface-to-air missile/gun systems was set to arrive this week for the air defense regiment stationed in the Sverdlovsk Region, Anti-Aircraft Missile Troops Commander of the Central Military District’s 14th Air Force.