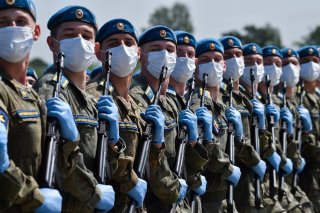 The Moscow Victory Day Parade, which is now scheduled for June 24, will feature iconic Russian/Soviet military vehicles – notably World War II era T-34 tanks that played a crucial role in ensuring victory – but it will also be used as a platform to unveil some new military hardware. This will include the latest Pantsyr-SM surface-to-air (SAM) missile/gun system that can be armed with small missiles to combat mini-drones.

This will mark the first time that the upgraded SAM system will be shown to the public. The Pantsyr-SM is a heavily modernized version of the Pantsyr-S SAM, which The National Interest previously reported on – the platform combines two rapid firing 30mm autocannons with a dozen SAMs. It was a Syrian-used version that was alleged to have shot down a Turkish RF-4 Phantom reconnaissance jet in 2012.

Russian state media reported that the new Pantsyr-SM will have longer-range missiles and will be capable of spotting, tracking and hitting a greater number of targets at a greater distance. In addition it will reportedly have greater capabilities for intercepting artillery munitions, missiles and drones. The system was upgraded to be more effective against all types of drones and the designers have taken into account experience gained in Syria.

The striking range of the system has been extended to 30 km.

As a SAM, the Pantsyr was designed to shield military and civilian facilities, including long-range air defense systems, from all modern as well as potential future air attack weapons. Much like the Pantsyr-S, the upgraded platform will consist of 12 surface-to-air missiles – with six missiles in two transport and launch containers each. The Pantsyr-SM is also armed with two 30mm guns, and each of those is capable of firing up to 40 rounds per second.

Reportedly, Moscow will use the Victory Day Parade to highlight this and other new Russian hardware. The Victory Day Celebrations, which marked the end of the Second World War – known as the Great Patriotic War to the Russians – was scheduled to be held on May 9 when it is traditionally held. However, it was postponed due to the coronavirus pandemic.

In late April more than 15,000 Russian soldiers were ordered back to base, and put under a two-week quarantine, in an effort to stop the spread of the novel coronavirus. Those soldiers had been taking part in rehearsals for the scheduled parade. As noted, in addition to the latest hardware, the Russian military went to great lengths to acquire a number of World War II vintage T-34 tanks – the Russian Federation received some 30 of the tanks from Laos as part of a three-way deal with Vietnam. Laos had been the last active operator of the T-34/85 in the world.

Despite the fact that COVID-19 remains an issue, Russia has opted to go ahead with the Victory Day Parade, which as reported is now scheduled for June 24. That date was chosen because it was on that day in 1945 when the first of the historic parades took place in 1945. That involved soldiers of the Red Army – including those who defended Moscow, Leningrad and Stalingrad and took part in capturing Berlin during the war – marching victoriously through Moscow's Red Square.

Russia's Defense Ministry told state media that it was taking all necessary "epidemiological safety measures" in preparations for next week's parade.