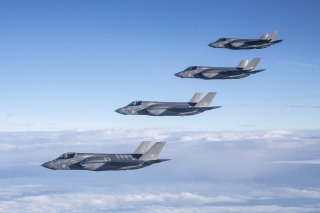 Here's What You Need To Remember: It's not certain, however - especially since the F-35s that the RAF is already slated to buy won't arrive until the mid-2020s. By that time, Britain might have decided to pursue its "Tempest" fighter instead.

Back in August, it looked like the UK would cut its order for the Lockheed Martin F-35 fighter jets. While the British Ministry of Defence had agreed to buy forty-eight of the F-35B Joint Strike Fighters—the short take-off and vertical landing variant of the jet designed for use on aircraft carriers—the original target was to have 138 of the stealth aircraft in service with the British military in the coming years.

Then in the late summer, it was reported that Britain would scale back those plans, and instead would only acquire around seventy of the stealth aircraft, which would enable it to have sixty in service and keep an additional ten as back-ups in case of damage or malfunction.

Now the UK is changing course once again. Last month, the UK government announced that it would significantly increase its military budget, and in terms of spending would trail only the United States and China.

That means more F-35 jets—beyond the forty-eight ordered—could be flying to the UK.

Just this month, three of the fifth-generation stealth aircraft departed the Lockheed Martin factory and flown by pilots of Royal Air Force, and they could be followed by additional fighters in the coming months.

Exactly how many F-35 jets that could be isn’t certain. It will likely take through 2025 for the Royal Air Force to receive all of the forty-eight aircraft. Beyond that, the number of additional aircraft remains unknown. Defense News reported that the number and profile of a future order will be determined by the outcome of an assessment on the British future combat air strategy.

“We know we need to increase the number of F-35Bs to support the [Royal Navy] carrier through to its out-of-service date,” Air Marshal Richard Knighton, the deputy chief of the defense staff for capability, told a parliamentary Defence committee on Dec. 8.

“The precise number will depend a bit on the work we do and the investment we are making on the FCAS,” which was a reference to the UK-led Tempest program. Money previously earmarked for the acquisition of F-35 jets could be redirected towards the Tempest, the still in development twin-engine stealth fighter that is expected to enter service in the 2030s.

The aircraft reportedly boasts a number of sixth-generation technologies including being optionally-manned, the ability to mount hypersonic or directed energy weapons, and the capability to deploy and control drone swarms. London has already seeded “Team Tempest” with £2 billion ($2.6 billion) for initial development through the end of this year 2020. Major defense contractor BAE System is leading development with the Royal Air Force, with Rolls Royce contributing engines, European firm MBDA integrating weapons, and Italian company Leonardo developing sensors and avionics.

However, with the aircraft not on track for arrival for at least another decade—and perhaps upwards of twenty years—the F-35 could be looking pretty good again.

“We expect to make a definitive judgment around the total future fleet in the 2025 timeframe,” Knighton added.