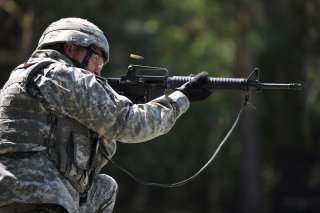 Here's What You Need To Remember: The M16 series of weapons has been in continuous use by the U.S. Military for more than fifty years. A mature, reliable weapon design, there is still room for growth in the form of a change in caliber and to a gas piston operating system. Such improvements could ensure the M16 family remains on the front lines for another twenty years or more, making it one of the longest-serving weapons in U.S. military history.

In the early 1980s, the U.S. Army and Marine Corps decided the M16A1 assault rifle needed an upgrade. The result was an improved version, the M16A2, and later the M16A3, M16A4, and the shorter, compact M4A1 carbine. The story of the M16 post-Vietnam is the story of how a mature, successful weapon design can be adapted to suit a variety of needs and missions.

The U.S. Military adopted the M16 assault rifle in the early 1960s, abandoning the large, high power-battle rifle concept for a lighter, more compact weapon that fired smaller caliber cartridges. The M16 rifle initially drew glowing reviews from U.S. advisers in Vietnam but a number of ugly problems reared their heads as the weapon was issued to ground troops deployed to the Southeast Asia. Although the problems were eventually solved, the M16 gained a reputation for being unreliable, a reputation that dogs it to this day.

(This is part three of a three part series on the M16 Rifle. See part one and two.)

By 1970 a new version of the M16, the M16A1 had solved the most serious issues with the M16 rifle. The lack of corrosion-resistant chrome plating, thin plastic buttstocks, the ease with which the weapon rusted and the substitution of the original gunpowder for a poor substitute caused up to thirty percent of weapons in front-line combat units to be considered unserviceable. The M16A1 corrected most of these problems and was reissued to troops in the field.

Manufacturer Colt and the U.S. Army continued to build on the M16A1, making it a more dangerous weapon. In 1969, the Army began issuing thirty-round magazines for the M16. As early as 1963 the Army was interested in equipping the M16 with a forty-millimeter grenade launcher, and in December 1966 the first XM148 underbarrel grenade launchers were shipped to Vietnam. A breech loaded, single shot grenade launcher, the XM148’s trial by fire was short lived as five months later the Army reported it was “unsatisfactory for use in the Vietnam environment.” By 1969 the Army had selected a new grenade launcher, the M203, which served into the 2010s. The M203 is currently being replaced by the Heckler and Koch-designed M320.

The M16A1 itself served into the early 1980s, participating in the invasion of Panama, the Beirut peacekeeping mission, and arming mechanized infantry units facing down the Warsaw Pact and Red Army in Western Europe.

The M16A1E1 did well in tests and was quickly adopted by the U.S. Marines, who suffered declining stocks of the M16A1, made the first purchases. The weapon was renamed the M16A2 and became standard across the U.S. Armed Forces.

One of the most unusual variants of the M16 series was the M231 Firing Port Weapon. The M231 was designed to be fired by mechanized infantrymen riding inside M2 Bradley infantry fighting vehicles. Unlike the earlier M113 APC, infantry assigned to M2 Bradley units would remain in the vehicle during an mechanized attack. The M231 was designed to fire from special ports along the Bradley’s flanks, with embarked soldiers providing suppressive fire. The M231 had a heavy 11” barrel and fired fully automatic. Although implemented into the M2 Bradley it was never popular and the ports were eventually covered up by vehicle armor upgrades.

The M16A2 rifle first saw combat in the 1989 invasion of Panama, followed by Operation Desert Storm in 1991. In 1993 it went to war again in Somalia, then Haiti, followed by the Balkans. In 1999, it began issuing a new weapon, the M4 carbine, to frontline units. The M4 was for the most part a M16A2 with a shorter 14.5” (as opposed to 20”) barrel and collapsible buttstock. The M4 carbine went to war shortly after 9/11 as U.S. Army and Marine units streamed into Afghanistan, then later in the invasion and occupation of Iraq.

One major innovation introduced with the M4 carbine was the ability to attach optics, lights, and laser aiming devices. M4s did away with the traditional M16 carry handle and were equipped with the Picatinny rail system, developed by Picatinny Arsenal, for the mounting of optics and accessories. This allowed optics such as the Trijicon ACOG to ride a shorter distance over the bore and laser aiming devices such as the AN/PEQ-15 to be mounted on the weapon handguard.

Development of full-sized M16 didn’t cease, however. The U.S. Navy ordered small quantities of the so-called M16A3, which was largely identical to the M16A2 except it fired fully automatic. In 1997 the U.S. Army and U.S. Marines fielded the M16A4, which was a M16A2 with a new muzzle brake and aluminum handguard with Picatinny accessory rails. The Army used it in far smaller quantities, preferring the M4 carbine, but the Marines held onto the M16A4 and now use a mixture of M4s and M16A4s.

The M16 series of weapons has been in continuous use by the U.S. Military for more than fifty years. A mature, reliable weapon design, there is still room for growth in the form of a change in caliber and to a gas piston operating system. Such improvements could ensure the M16 family remains on the front lines for another twenty years or more, making it one of the longest-serving weapons in U.S. military history.