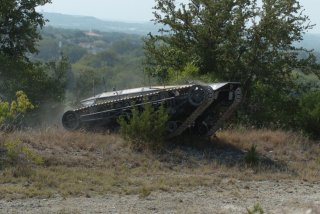 Here's What You Need To Remember: In our discussion of artificial intelligence and autonomy, Murray touched upon this saying the future will not only involve manned/unmanned teaming . . . but “unmanned-unmanned” teaming in some instances. Given all of this, Murray made a point to explain that these kinds of new technologies will fundamentally change the character of war, driving new concepts, strategies and formations.

These prospects, involving a wide swath of overlapping factors, are now capturing the attention of a special group of “Future Concepts” experts at Fort Eustis, Virginia, with Army Futures Command. They are now analyzing the kinds of operational environments, weapons, technologies and warfare maneuvers expected to characterize warfare decades from now.

Army Futures Command Combat Capabilities Development Command calls it “Team Ignite,” a special future-oriented force of scientists, weapons technology experts and warfare strategy and concept developers. The idea is, fundamentally, not to just explore how new technologies will arrive—and there are many paradigm-changing systems in early development—but how will new technology intersect with new concepts of war? . . . [C]hanging maneuver formations, multi-domain attack and forcing major adaptations to mechanized warfare?”

“It is not a standing organization but a cross functional team between my technologists, my scientists and my concept writers at our Futures and Concepts Center. This forces the people who are thinking about future concepts to take technology into account because the technologists are right there with them,” Gen.John Murray, commanding general of Army Futures Command told me in an interview for the National Interest.

Attacking formations of armored columns could, for instance, maneuver in a broader, potentially more lethal dis-aggregated fashion, made possible by advanced sensors, autonomy, networking and AI systems. A less condensed force would of course be less vulnerable to large-scale destruction by enemy attacks.

Speaking to current methods of bringing these ideas to life, Brig. Gen. John Rafferty, Director of the Long Range Precision Fires Cross Functional Team, Army Futures Command, told me that new technologies and emerging warfare tactics will inspire a new, modern notion of traditional “Combined Arms Maneuver.” A vital element of the kind of warfare envisioned by futurists incorporates Information Dominance and . . . as Rafferty put it, using a tactical network. He told me that many key programs and platforms (especially Long-Range Precision Fires in his case) now being developed to surge the Army into future decades of war—are all being engineered with a mind to a “network.”

Extending this reasoning, several pertinent elements of emphasis with major Army programs point to a networking “synergy” wherein platforms operate as attack machines and information “nodes” in a larger, multi-domain meshed network. For instance, the Army’s Future Vertical Lift aircraft program is not only looking at much faster speeds, longer range combat radius and next-generation weapons applications for its new aircraft—but also developing artificial-intelligence-enabled targeting sensors, improving  manned/unmanned teaming wherein helicopters operate nearby air and ground drones and future sensor technologies able to gather, organize and transmit combat-crucial intelligence information in real time across land, sea and air domains—simultaneously. Murray said early Future Attack Reconnaissance Aircraft demonstrates have already hit two hundred knots, something which promises to substantially change future air attack tactics and the need to share information quickly. Intelligence, surveillance, and reconnaissance and information-sharing, enabled by artificial-intelligence-generated computer and sensor networks, will organize targeting, terrain and threat data in seconds to present human decisionmakers with immediate options. The concept here with FVL, (and other programs too) now having evolved over years, is to ease the “cognitive burden” upon air crews by using advanced algorithms to perform certain indispensable procedural functions faster and more efficiently than humans can—all the while leaving crucial dynamic decisions to humans. Fast decision making will, according to many, provide the foundation for who wins future wars, all the more reason why artificial-intelligence-enabled algorithms can perform real-time analytics on crucial combat data . . . in seconds.

For example, a key initial concept for FVL was developed a “Controlled Flight into Terrain” technology wherein on-board sensors could gather, aggregate and analyze surrounding information to ensure an aircraft does not collide with a mountain or other dangerous object in the event that a pilot was injured or incapacitated. Or, machines could control the flight path of nearby drones, adjust the sensor payloads autonomously under human supervision. Early iterations of Army helicopter manned-unmanned teaming, for instance, have long enabled Apache pilots with an ability to identify targets before they even take off for a mission. New generations of these kinds of applications will change combat even more.

While some of these enabling technologies are already here, there are a multitude of ways in which futurists, including basic research experts at the Army Research Laboratory, are looking at entirely new generations of AI-empowered information sharing and command and control. Interestingly, in a discussion of fast-emerging technologies and anticipated future dynamics, Army Acquisition Executive Dr. Bruce Jette told me that new dynamics related to “command and control” tactics, strategies, techniques are concepts form a foundational basis for much of his philosophical thinking about modernization. (Jette is the Assistant Secretary of the Army, Acquisition, Logistics and Technology). Thinking about his comments, regarding the topics which now occupy much of his time and focus, it's clear that command and control essentially provides an indispensable backbone to nearly every future system in terms of how it will operate in war, changing combat maneuver, formation and strategy.

For example, the ARL is now immersed in early work using artificial intelligence to enable armored vehicles to operate small fleets of air and ground robots. To expedite this process, Army Research Laboratory engineers are already setting up Next-Generation Combat Vehicle command and control cockpit configurations using artificial intelligence applications to coordinate drone operations. While the Army plans to ensure humans are ultimately in the role of vital decision making, the ARL and other service planners are now researching the prospect of much greater levels of autonomy, such as small swarms of morphing, interactive unmanned systems performing essential procedural and tactical functions without needing human intervention. This would include, ARL scientists told me, things like swarms of small robots acting like “ant colonies” and autonomously forming bridges, shaping formations, analyzing targeting data as forward-positioned nodes, aggregating intelligence information, operating weapons or even organizing supplies independently. ARL scientists explained that as groups of robots operating in an integrated or “collective” fashion.

In our discussion of artificial intelligence and autonomy, Murray touched upon this saying the future will not only involve manned/unmanned teaming . . . but “unmanned-unmanned” teaming in some instances. Given all of this, Murray made a point to explain that these kinds of new technologies will fundamentally change the character of war, driving new concepts, strategies and formations.

Interestingly, Gen. Murray mentioned a key or even somewhat defining paradox, namely that as much as planners, experts, scientists and weapons developers prepare for an anticipated future warfare environment—they are almost invariably destined to have some things wrong. His thinking is along the lines of a famous warfare saying . . . “no war plan survives first contact with the enemy.” With this in mind—the Army prepares, simply put . . . to adapt.

“The most important thing to understand is that you are never going to be right. [The] 2040-ish is the focus area. My understanding is that technology, economics, globalization and demographics are all going to have an impact. We are trying to describe and not define what that may look like. If you get that right, it really drives the concepts and drives the material you are going to need to operate in that environment,” Murray said.