Rough Job: A Nuclear Bomb Exploded Over These Six Men 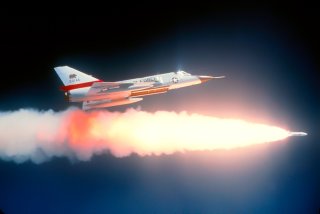 Here's What You Need to Remember: Above-ground nuclear tests were finally banned in 1963 as a result of the Partial Nuclear Test Ban Treaty, which limited radiation exposure to test personnel.

Instead of being granted three wishes the five United States Airmen and cameraman who volunteered to stand directly under a nuclear explosion during a test of the Douglas AIR-2 Genie air-to-air rocket in the Nevada desert were eventually “rewarded” with cancer while they were in their 1940s and 1950s. Whether it should be seen as a “successful” test that the AIR-2 Genie could, in fact, be used safely over populated areas remains a matter of debate, but the fact that test was the one and only one of its kind likely answers the question.

Initially known as the MB-1, the AIR-2A Genie was developed as an air-to-air rocket that was fitted with a nuclear warhead designed for use against formations of enemy bombers. The Genie had no guidance system but was instead was powered by a solid-propellant rocket motor. It was first test-launched in 1956 before becoming operational in January 1957.

As noted, it was only tested once on July 19, 1957—exactly thirteen years and three days after the first atomic bomb detonated at the Trinity Test Site in New Mexico. What was remarkable about the AIR-2 Genie test wasn’t just that it was the only live demonstration of a U.S. nuclear-tipped air-to-air rocket, but also that when it was launched at eighteen thousand feet from an F-89J interceptor and detonated over the Yucca Flats in Nevada there were six men directly underneath.

And they volunteered to be there.

As Popular Mechanics reported, five men including Colonel Sidney Bruce, Lt. Col. Frank P. Ball, Major Norman “Bodie” Bodinger, Major John Hughes, and Don Lutrell volunteered to stand directly under the detonation point and stood their ground as the nuclear explosion went off 3.5 miles overhead. One additional man, George Yoshitake didn’t exactly “volunteer” but instead there to operate the camera and capture the moment for posterity.

Such actions may seem crazy today, but we should remember that based on the science of the time the men weren’t expected to experience any immediate harm from the explosion.

Moreover, past nuclear detonations had been witnessed by those just miles away—so much so that Las Vegas actually promoted “atomic tourism” where people were encouraged to travel to “Sin City” and view various atomic tests taking place just outside the city. The Las Vegas Chamber of Commerce even issued a calendar for tourists, which listed the schedule times of bomb detonations and the best places to view them—while the Sky Room at the Desert Inn was promoted to be one of the best places to take in the explosions!

Thus, the idea of six men volunteering to be miles under an explosion shouldn’t really be all that surprising in the context of the era.

Sadly all six men present under the Genie detonation eventually developed cancer, but whether it was from that one incident is questionable as all the men were present at several nuclear tests. Their respective cancers could have been as much a cumulative effect of several tests as from being exposed to this one bomb.

Above-ground nuclear tests were finally banned in 1963 as a result of the Partial Nuclear Test Ban Treaty, which limited radiation exposure to test personnel.

As for the AIR-2A it was still carried by a number of USAF aircraft including the F-89J, F-101B and F-106A interceptor. Thousands of the Genie were built before production ended in 1962, but the existing AIR-2As remained in service until the mid-1980s along with the ATR-2, a training version of the Genie that had an inert rocket motor and no nuclear warhead. Fortunately, this was a Genie that remained in the bottle after its initial test!

This article first appeared earlier and is reprinted due to reader interest.