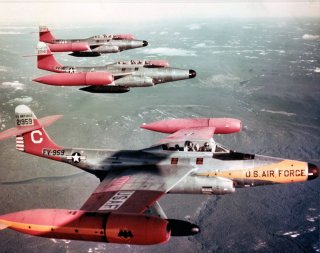 The all-weather, twin-engine Northrop F-89 Scorpion was the first jet-powered interceptor aircraft designed specifically for that role to enter service with the Air Defense Command. The two-seat aircraft had a radar operator guide the pilot, which enabled the F-89 to locate, intercept and destroy enemy aircraft day or night in any type of weather condition.

Officially designated a fighter, the F-89 was powered by two Allison J35 engines with 8,000 lbs. of thrust, each with an afterburner. The aircraft had a cruising speed of 465mph and with afterburner had a maximum speed of 630mph, a range of 1,000 miles, and a service ceiling of 45,000 feet.

The F-89 made its maiden flight in August 1948, and deliveries to the United States Air Force began in July 1950. A total of 1,050 of the interceptors were produced and the straight-winged aircraft remained in service until the late 1960s. As an interceptor, the plane was designed to shoot down Soviet nuclear bombers before they could reach the United States.

The F-89 was equipped with the most advanced weapons available at the time, yet it was still largely conventional for the time, with its internal twin-engine turbojet configuration and air intakes mounted low along the fuselage sides.

It was the first Air Force fighter jet to carry an all-rocket armament and the first jet to be equipped with the Hughes Falcon air-to-air guided missiles, and these could be automatically launched in a huge volley once the aircraft's radar gun sight determined it was aligned with a bomber target.

Notably, the Scorpion was modified to increase its potential sting!

The F-89J (modified from the F-89D) became the first combat aircraft armed with air-to-air nuclear weapons, the unguided Genie rocket. In July 1957, it fired a Genie test rocket with a nuclear warhead, which detonated over a Nevada test range. That marked the first launch of such a weapon.

The MB-1 Genie, later renamed the AIR-2A—and popularly nicknamed "Ding Dong"—was a three-meter long rocket armed with a 1.5 kiloton nuclear W25 warhead in its tips. The AIR-2s were later converted from atomic air-to-air rockets into a conventional weapon for blowing up targets on the ground. Instead of the 1.5-kiloton nuclear warhead inside of the Genie, technicians packed the nose with tiny bomblets the size of hand grenades. However, by the time these modifications were made the F-89 Scorpion was being replaced by newer and more modern aircraft including the F-4 Phantom Jets.

Yet, for much of the early 1960s, the Scorpion and the Genie were paired together.

In total, 350 of the F-89Ds were converted to "J" models and these became the Air Defense Command's first fighter-interceptor to carry nuclear armament. Beginning in the late 1950s, former-USAF F-89s were transferred to the Air National Guard—without the nuclear weapons—and the last of those was retired in July 1969.