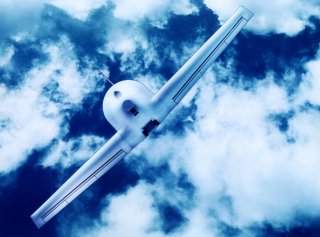 Here’s What You Need to Remember: Weighing a beefy 8,500 pounds, the RQ-3 DarkStar was powered by a Williams-Rolls FJ44-1A engine that offered a takeoff thrust of 1,900 pounds. It provided a cruising speed of 288 mph and a service ceiling of 45,000 feet. A total of four were built, including the first prototype that crashed.

Last year, the United States Air Force announced that it would cut the fleet of its Global Hawk spy drones, likely as it was opting to adopt the stealthy RQ-180, a stealthy, flying-wing surveillance drone that reportedly entered service back in 2017. The service has never officially acknowledged the existence of the Northrop Grumman-produced RQ-180, which is believed to have first flown in 2010, and which may have been deployed near China in September 2020.

Nearly twenty five years ago the RQ-3 DarkStar took its first flight, but a year later the first prototype crashed during its second flight and not in the “going down in a blaze of glory” kind of way. It was more of a suggestion that the bugs had to be worked on the highly-advanced, stealthy reconnaissance remotely piloted aircraft (RPA).