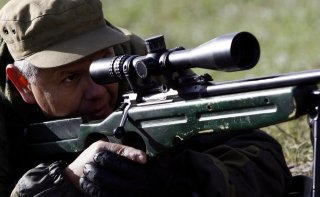 Here's What You Need to Remember: The DVL-10 platform, which was initially created for counter-terrorist units operating primarily in urban areas, was not designed as a one-size-fits-all solution, but rather is adaptable to the needs of the soldier or unit. Barrels of various calibers can be mounted on the sniper rifle: 7.62x51mm (.308 Winchester), 6.5x47mm Lapua, and 6.7mm (.338) Federal.

Russian snipers have long been the subject of legend, earning praise for helping defend the motherland from invaders during World War II while remaining among the deadliest shots in the world today. Many of the rifles carried by the Russian snipers and marksman over the years—such as the infamous SVD Dragunov—have also become a thing of legend.

Soon a new rifle could earn such praise. It is the DVL-10M3, a new multi-caliber sniper rifle that was developed by Lobaev Arms, and presented by Russia’s state arms seller Rosoboronexport—part of the state hi-tech Rostec corporation—at this month’s Interpolitex-2020 International Homeland Security Exhibition in Moscow.

Tass reported that the new firearm is far more compact than previously designed Lobaev Arms rifles, but despite its smaller size, its developers said it remains highly accurate and quite deadly.

“The DVL-10M3 rifle’s weight has been reduced to 4.5 kg while it features a barrel length of 500mm,” explained Rosoboronexport Senior Expert Alexander Slobodyanyuk during a video presentation on the company’s YouTube channel. “It is characterized by a very good accuracy of fire that does not exceed 0.38 minute of arc.”

This is the latest variant of Labaev Arm’s DVL-10 series of bolt-action sniper rifles. The original DVL-10M1 “Saboteur,” which was introduced in 2014, featured an integrally suppressed barrel that was designed for proprietary subsonic cartridges; while the DVL-10M2 “Urbana,” introduced two years later, was developed as an unsuppressed variant. However, the Urbana model could be still converted to the DVL-10M1 with a barrel change.

The DVL-10 platform, which was initially created for counter-terrorist units operating primarily in urban areas, was not designed as a one-size-fits-all solution, but rather is adaptable to the needs of the soldier or unit. Barrels of various calibers can be mounted on the sniper rifle: 7.62x51mm (.308 Winchester), 6.5x47mm Lapua, and 6.7mm (.338) Federal.

Despite the reduction in weight, the new DVL-10M3 “Volkodav,” which can also be fitted with a suppressor, can still reduce recoil and allows the shooter to keep the rifle on the sightline during firing.

Russia’s military will now have a few more sniper rifles in its arsenal and the DVL-10 series may be used alongside the equally deadly Orsis T-5000, which has been described as being one of the most capable bolt action sniper rifles in the world today.

However, the Russian military won’t be alone in getting new long-range rifles to test out. This past June, U.S. Army soldiers began to receive the new M110A1 Squad Designated Marksman Rifle (SDMR), a semi-automatic 7.62x51mm weapon that was fielded to soldiers at Fort Stewart, Georgia. The SDMR is a lightweight version of German-based Heckler & Koch’s G28/HK417 sniper rifle. The German company was awarded a $44.6 million contract in 2016 to develop a special version with a baffle-less OSS suppressor. It has a 16-inch long barrel and weighs 8.7 pounds with an empty magazine—meeting the U.S. Army’s Compact Semi-Automatic Sniper System (CSASS) program size and weight requirements.