Russia Deserves to Be Proud of Its Su-57 Stealth Fighter 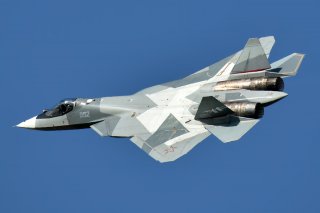 Here's What You Need To Remember: Tactically speaking, both the Su-57 and the F-22 are engineered to use stealth, combat maneuverability  and dogfighting capability to address threats which may emerge, should the aircraft be detected. Advanced surveillance radar, for example, might be able to detect that something was “there” but stop short of being able to track, pinpoint and destroy the plane with “engagment” radar.

Senior Russian military officials have announced that the emerging Su-57 5th-generation stealth fighter recently met nearly all of its specified performance requirements during state testing, raising questions as to the actual state of its operational sophistication.

A report in The United News of India, citing the Russian Sputnik publication, quotes Deputy Prime Minister Yuri Borisov stating “during state tests, the Su-57 fighter has completely confirmed almost all of the requirements of its performance specification.”

Borisov went on to say that the state contract for the delivery of 76 planes is on track with its “supply schedule,” indicating progress with Russia’s production of the aircraft.

Exactly what requirements were demonstrated, and in what capacity or to what extent various performance parameters were achieved … may be somewhat unclear. The twin-engine stealth fighter, intended to rival the U.S. F-22, does exhibit a blended wing-body stealth configuration absent radar-detectable hard-edges, contours or protrusions. The aircraft does appear stealthy to the naked eye, however both of its engine exhaust tubes appear to protrude somewhat, presenting shapes or configurations potentially seen by advanced radar technologies. Also, perhaps of greater significance, the apparent size of the heat exhaust might seem to raise questions about its heat signature. Nonetheless, Sputnik news cited reduced heat signature as one of several Su-57 technical advantages in a 2010 report, earlier in the aircraft’s developmental process.

“The use of composite materials and advanced technologies, improved aerodynamics, and reduced engine heat signature minimizes its radio-frequency, optical and infrared visibility. All these features significantly boost the combat effectiveness of the plane,” the Sukhoi maker said in a statement, according to Sputnik news.

Interestingly by comparison, a look at the F-22s exhaust shows that they are much more fully “blended” in a horizontal fashion with the fuselage than those of the Su-57, indicating that it may indeed have superior heat-reduction engineering as well as a smoother, stealthier shape on the back end.

Part of why the shape of the aircraft might, to some extent, lend itself to being somewhat detectable is because high-speed air-to-air fighters just as the Su-57 or F-22 are designed to rely upon a host of factors to destroy enemies, not purely stealth as would be the case with a stealth bomber such as a B-2 or B-21. Tactically speaking, both the Su-57 and the F-22 are engineered to use stealth, combat maneuverability  and dogfighting capability to address threats which may emerge, should the aircraft be detected. Advanced surveillance radar, for example, might be able to detect that something was “there” but stop short of being able to track, pinpoint and destroy the plane with “engagment” radar. Also, while much is not known about the Su-57, it quite likely does include composite, radar-absorbing materials, much like the F-35 and F-22.

The Su-57 can reportedly reach speeds of Mach 2 and, also similar to the F-22, operate with supercruise technology, meaning the ability to sustain supersonic speeds without needing afterburners. Information from “Aviation News” reports that the Su-57 is engineered with 12 weapons hardpoints, including six internal and six external. The data also lists a long arsenal of weapons to include anti-ship missiles, air-to-air and air-to-surface missiles and guided bombs.