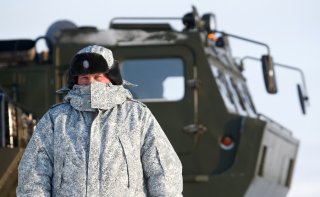 As Russia-NATO tensions mount in the Black Sea, Russian bombers are conducting another round of drills in the Arctic region. Russia’s Defense Ministry reported earlier this week that Tu-160 and Tu-95MS planes launched cruise missiles during live-fire drills at an Arctic firing range. "During the tactical flight exercise, crews of the Tu-160 and Tu-95MS strategic bombers conducted launches of airborne cruise missiles at land-based targets at a firing range in the Arctic region," said the Defense Ministry.

The statement added that the planes took off from the Saratov region, which is home to the Engels Air Base, and “covered a distance of more than 4,000 kilometers.” The Tu-95MS bombers also practiced combat drills at a firing range at Irkutsk. It is unclear when the drills began, but the Defense Ministry specifies that they will last through July 9. Russia’s Northern Fleet announced in early June that it will stage a series of large-scale military preparedness drills in the Arctic this Autumn, adding that the exercises are partly meant to “ensure the safety” of the Northern Sea Route. Among other things, the route provides a much faster form of transit from Russia’s northern reaches to the Pacific region.

The Tu-160 “Blackjack” is Russia’s staple heavy strategic bomber, boasting a 40,000-kilogram payload capacity. The bomber is compatible with a wide range of cruise missiles from the Raduga Kh-55SM/101/102/555 series, allowing the plane to function as a heavy standoff weapons platform. It was reported in prior years that the Russian military is reviewing plans to fit Tu-160 bombers with the new hypersonic, nuclear-capable Kh-47M2 Kinzhal missile, but the current state of those deliberations is unknown. All of the seventeen currently-serving Tu-160’s will be upgraded to the new Tu-160M standard, which will bring an overhauled avionics suite and enhanced radar systems. The Tu-160M will be followed by the Tu-160M2 revision, which will reportedly bring a modernized glass cockpit and new NK-32-02 engines. The Tu-95MS “Bear-H” a four-engine strategic bomber that doubles as a missile carrier. The plane boasts two 23mm twin-barreled cannons, which can potentially be used against certain aerial targets, but the star of the show is the Tu-95MS’ full complement of Raduga Kh missiles with nuclear and conventional warheads.

Moscow has recommitted to ramping up its military buildup in the Arctic following the most recent wave of tensions between Russia and NATO, which came to a head in June during the Seabreeze exercises co-hosted in the Black Sea by the United States and Ukraine. “There is no secret that a number of countries are actively trying to curb Russian engagements in the Arctic and that they encroach on the mineral resources of the Arctic Ocean and seek control over strategic maritime and air communications in the region,” said Dmitry Medvedev, Deputy Chairman of Russia’s Security Council. Medvedev added that NATO incursions into the Arctic are “absolutely unacceptable” and must be met by a more robust Russian military presence in the region.  Russia “must continue its work on the strengthening of Arctic troops equipped with modern types of armament,” he said.