The Seabreeze Military Exercises Are Stoking Tensions in the Black Sea 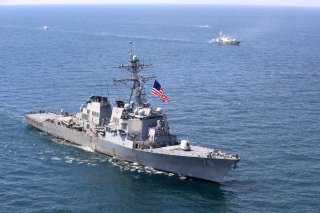 As the US-Ukrainian Seabreeze exercises enter their final stages, Russia’s military is staying on high alert.

Russia’s Defense Ministry announced on Wednesday that Tu-22M3 bombers performed a “scheduled flight in the airspace over the neutral waters of the Black Sea.” The Defense Ministry’s statement specified that the flight lasted approximately five hours, adding that the bombers were escorted by Su-30M2 fighters belonging to the Southern Military District and Air Defense Army.

Also this week, the Black Sea Fleet’s Su-30 fighters intercepted a U.S. Navy Boeing P-8 Poseidon patrol plane. "The crews of the Russian fighters identified the aerial target as a Boeing P-8 Poseidon aircraft and shadowed it over the Black Sea,” reported Russia’s National Defense Control Center, adding that the U.S. plane was “not allowed to violate Russia’s state borders.”

Seabreeze is a series of multinational maritime exercises in the Black Sea, co-hosted by the United States and Ukraine. The drills are being held against the backdrop of an unresolved territorial dispute over the status of Crimea, which was annexed by Russia in 2014 but remains internationally recognized as part of Ukraine. Military tensions flared between Russia and the West when, several days into Seabreeze, the British Type 45 destroyer HMS Defender ventured as far as three kilometers into Russia’s claimed territorial waters off Crimea’s coast. Russia’s Coast Guard and Black Sea Fleet fired warning shots and dropped bombs in the destroyer’s path to chase the Defender away, sparking a high-profile dispute between Kremlin and London officials over key details from the incident.

The Kremlin has vigorously condemned this year’s installment of Seabreeze. "It goes without saying that this is provocative muscle flexing," said Foreign Ministry spokeswoman Maria Zakharova. "Combat deployment of such a scale near Russian territory evokes a corresponding reaction from us. Washington and its allies are systematically turning the Black Sea from a space of cooperation, created there, into a zone of military standoff. This is being done intentionally, in order to make another region of the world unstable under the United States' guidance and turn it into a source of threat".

Zakharova added that the drill “conveys an obvious anti-Russian message,” citing the Defender altercation and a subsequent scandal involving a Dutch frigate. The Netherlands’ Defense Ministry alleged in late June that Russian warplanes harassed the De Zeven Provinciën-class frigate Evertsen, employing jamming techniques and carrying out “mock attacks” near the frigate. Defense Minister Ank Bijleveld-Schouten said there “is no justification whatsoever for this kind of aggressive act, which also unnecessarily increases the chance of accidents.” Russia’s Defense Ministry responded that it deployed Su-30 and Su-24 “at a safe distance” to prevent the Evertsen from “violating” Russia’s territorial waters.

"The way we see it, the incidents were coordinated,” Zakharova continued. “It is a clear indication NATO is pushing ahead with its aggressive policy towards Russia. While professing its readiness for a dialogue, in reality, the North Atlantic Alliance systematically destabilizes the situation along our perimeter borders and increases the risk of armed incidents.”

Top Kremlin officials, up to and including President Vladimir Putin, have grown increasingly intolerant of NATO exercises and innocent passage operations in Russia’s claimed Black Sea waters over the past several years. In a recent TV appearance, Putin appeared to suggest that Russian forces could have sunk the HMS Defender without provoking a large-scale military conflict in the Black Sea because, in his words, western leaders “know they could not win a war like that.”