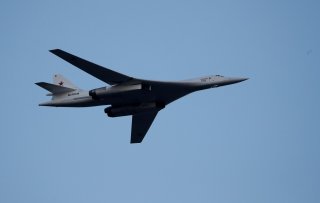 Here's What You Need to Remember: It was revealed in late 2020 that the new Tu-160M had already undertaken its maiden flight, suggesting that the aircraft is further along in the research and development cycle than previously anticipated.

The modernized Tu-160M strategic bomber is on the verge of entering service in Russia’s Air Force, bringing a slew of practical updates to the established Tu-160 “Blackjack” design formula.

The 1980’s Tu-160 Blackjack set no shortage of design records over the course of its storied career, earning the monikers of fastest, largest, and heaviest bomber all at once. But the past four decades have taken their toll on the Soviet-era bomber, which is increasingly showing its age in the avionics department as well as in several performance categories.

It was revealed in late 2020 that the new Tu-160M—a deep modernization of the original Tu-160—had already undertaken its maiden flight, suggesting that the aircraft is further along in the research and development cycle than previously anticipated.

As with most other Russian modernizations of Soviet-era aircraft, the Tu-160M largely retains the ubiquitous variable-sweep wing design of its predecessor. However, their similar appearance belies a slew of major improvements under the hood. Perhaps most notably, the Tu-160M features what is often described as the “largest and most powerful” engines ever fitted onto a combat aircraft. In a press statement accompanying the flight, Russia’s United Aircraft Corporation highlighted the new engines as one of the Tu-160M’s core defining features: “At the aerodrome of the Kazan Aircraft Factory, a subsidiary of the Tupolev Company (part of the UAC within the state tech corporation Rostec), a heavily upgraded Tu-160M missile-carrying bomber with new serial-produced NK-32-02 engines performed its debut flight.” The Tu-160M’s updated Kuznetsov NK-32 engines are capable of 55,000 pounds of thrust, which may translate into a slew of performance benefits depending on the plane’s payload configuration and other specifications.

The Tu-160M retains its predecessor’s core design principle as a heavy stand-off weapons platform, or “missile carrier.” It is compatible with the Raduga Kh family of air-launched cruise missiles, including the 55SM, Kh-555, and— more recently— the Kh-101/102. The latter two are billed as stealthy cruise missiles, designed to slip past radar systems to target air defense installations and vital infrastructure. It is widely believed that the Kh-101 carries a conventional warhead, whereas the Kh-102 boasts a nuclear payload. The Tu-160M is likewise set to receive an updated avionics package, including a new communications suite, navigation equipment, radar array, and countermeasures system.

Though not a perfect comparison, the technical leap between the original Tu-160 and Tu-160M can be likened to the Rockwell B-1 Lancer and its proposed B-1R upgrade package.

All of the seventeen Tu-160’s currently in service are expected to be updated to the Tu-160M standard, with ten more Tu-160M models on order. But that’s not all—the Tu-160 upgrade cycle is planned across two distinct production phases. The Tu-160M will be followed by the deeply modernized Tu-160M2 revision, which is expected to enter service in 2023. The Tu-160M2 will reportedly bring a new stealth coating, glass cockpit, the same communications suite as Russia’s Su-57 fifth-generation fighter, a new generation of long-range cruise missiles, and another round of engine updates.

Mark Episkopos is the new national security reporter for the National Interest. This article first appeared earlier in 2021 and is being republished due to reader interest.