The B-1 Bomber Is Back (But There's a Catch) 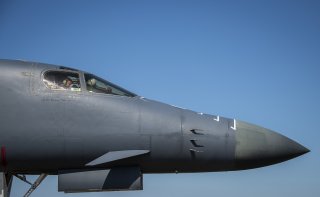 Readiness is improving. More crews are training. And the nearly four-decade-old swing-wing bomber could get a new, Mach-five missile that could help it to defeat Chinese and Russian air-defenses.

But Ray’s good news belies the bad news. The Air Force still wants to retire 17 of the 62 B-1s in order, it claims, to divert maintenance and modernization resources to the B-1s that are in the best structural condition.

“I have a very positive recovery for the B-1 community,” Ray told Air Force Magazine. “I have more flyable airplanes and ready crews than we’ve seen in many years.”

That’s “more sorties in a month than we’ve seen in the last three or four years.” Ray said Ellsworth flew 100 B-1 sorties in March 2020.

The higher pace of flights results in more crews getting the training they need to be combat-ready. “I’m sitting on a significantly larger number of mission-ready crews,” Ray said.

Contrast the recent improvements with the condition of the B-1 fleet just one year ago. In July 2019 just seven B-1s were fully mission-capable, South Dakota senator Mike Rounds revealed.

Fifteen of the swing-wing B-1s at the time were in depots for maintenance. Thirty-nine aircraft were down for inspections, Rounds said during a Senate Armed Services Committee hearing.

B-1s for many years flew from bases in the Middle East for long-endurance close-air-support missions over Iraq and Afghanistan.

Round-the-clock operations took a toll on the bombers. The Air Force twice in 2018 and 2019 grounded the B-1 fleet following mechanical failures.

A dearth of flyable B-1s has compelled the Air Force to transfer aircrew to other types, according to Air Force, citing a Senate subcommittee report.

At the nadir of B-1 readiness in 2019, the Air Force acted quickly to accelerate repairs to the complex planes while also pulling the bombers back from front-line deployments. B-2 and B-52 bombers filled in for the B-1s.

But the most dramatic effort to boost B-1 readiness also was the most controversial. The Air Force in its 2021 budget proposal asked Congress to let it retire the 17 worst-off B-1s. The service committed to keeping intact both bomb wings flying the B-1, but the wings would split 45 bombers instead of 62.

Lawmakers have yet to take up the proposal.

Ray also has touted plans to arm around 18 of the 45 B-1s he wants to keep with a new hypersonic missile. Traveling faster than five times the speed of sound, the Air-Launched Rapid Response Weapon could help B-1 crews strike heavily-defended targets.