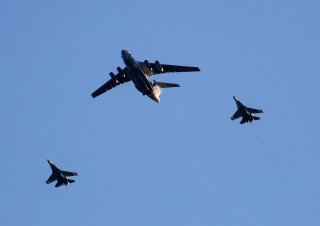 Here's What You Need To Remember: Russia's air force keeps "buzzing" American planes - intercepting them, flying extremely close, and creating an unnecessary safety risk. This is very dangerous; if an accident occurred, the political consequences could be dire.

Over the past few months, there has been a surge of alarming incidents between U.S. and Russian military aircraft. Most of the cases have entailed U.S. spy planes flying near the Russian coast adjacent to the Black Sea—supposedly in international airspace. It is a reckless practice that easily could escalate into a broader, very dangerous confrontation.

The Black Sea region definitely is the epicenter of such episodes. On July 30, a Russian Su-27 jet fighter intercepted two American surveillance aircraft; according to Russian officials, it was the fourth time in the final week of July that they caught U.S. planes in that sector approaching the Russian coast. Yet another interception took place on August 5, again involving two U.S. spy planes. Antiwar.com analyst Jason Ditz notes that although U.S. officials did not comment on why those spy planes are there, “the U.S. has seemed to have a growing interest in the Black Sea as tensions grow between Russia and NATO member Romania over control of that inland sea.”

Ted Galen Carpenter, a senior fellow in security studies at the Cato Institute and a contributing editor at the National Interest, is the author of twelve books and more than 850 articles on international affairs. This article first appeared earlier this year.