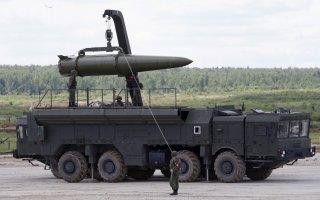 Here's What You Need to Know: Even if the Russian military develops a replacement, the Iskander-M could find an export market.

The 9K720 Iskander mobile short-range ballistic missile system was developed during the final years of the Cold War, but it wasn’t tested until 1996 and only entered service in 2006. It has seen use in the Russo-Georgian War and the Syrian Civil War, but now the platform, which was designed to evade missile defenses, could be on the way out by the end of the decade.

Tass reported that Russia has already laid out the groundwork for a new weapon to replace the Iskander.

“The Iskander-M will comply with modern requirements for quite a long time and will remain the basic weapon for the missile forces and artillery at least until 2030,” Russia’s Missile Forces and Artillery Chief Lt-Gen. Mikhail Matveyevsky said in an interview with the Rossiyskaya Gazeta newspaper. “As for the future weapon, we can say that quite substantial scientific groundwork is already available today for its development.”

The Iskander-M tactical missile system was designed to strike adversary low-sized and site targets to a range of up to 500 kilometers. It is equipped with two solid-propellant single-stage guided missiles, and targets can be located by satellite and aircraft as well as by conventional intelligence including an artillery observer or from aerial photos scanned into a computer. The missiles can be retargeted during flight. The optically-guided warheads can also be controlled via an encrypted radio transmission, including those from an AWACS or a drone.

The platform has also been adapted for use as an anti-ship platform. In the summer of 2019, Russia conducted two simulated “electronic launches” of the Iskander-M against targets in the Black Sea.

The tactical missile system’s potential “has been tapped (upgraded) by more than a half,” the general added, but at the same time suggested that instead of further pushing it to its full potential, the Russian military is currently carrying out scientific work on the concept of an advanced rocket artillery armament.

Even if the Russian military develops a replacement, the Iskander-M could find an export market. Several countries have expressed interest in the platform including Syria, Iran and the United Arab Emirates—but it is uncertain if the UAE still has interest. To date only Armenia and Algeria have received the Iskander systems, in 2016 and 2017 respectively.

In addition to Iskander missiles based on the Russian mainland, the platform has been deployed to the semi-exclave Kaliningrad, where the missiles continue to threaten parts of Poland, Sweden, Germany, Belarus, Ukraine, Lithuania, and Latvia. The mobile missile carriers, which have long been a Russian military hallmark, also provide the opportunity to choke off parts of the Baltic Sea.