Russia Is Taking Its New Hypersonic Missiles Out to Sea 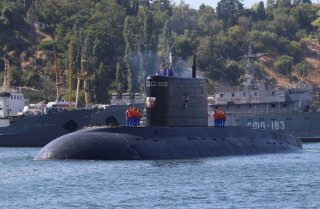 Here's What You Need to Remember: Should Russia succeed in launching a scramjet-powered hypersonic missile from beneath the surface, then that development might represent a substantial breakthrough sufficient to generate international attention.

Russia plans to be the first country to fire a hypersonic missile from a submarine, a new attack prospect likely to introduce new tactical options for commanders looking to attack from the sea.

Submarines can fire high-speed cruise missiles—such as U.S. Tomahawks or Russian Kalibr—that are able to travel five hundred or more miles per hour. An attack weapon capable of traveling at hypersonic speeds introduces an entirely new dimension of surprise attack.

Weapons such as the Tomahawk are often considered “first strike” possibilities in warfare engagements given their precision and range. They can destroy fixed land targets such as command and control centers, bunkers and other types of fortified enemy targets. Tomahawks were designed to fly parallel to the ground for the specific purpose of evading Soviet air defenses during the Cold War. Following the end of that war, the U.S. Navy has regularly made upgrades to it. The Tomahawk missiles of today can change course mid-flight to hit moving targets, rely upon a wider range of guidance systems and datalinks, and even leverage new kinds of explosives.

A sea-launched weapon able to travel at five times the speed of sound would be much more likely to penetrate or evade enemy air defense systems. Some people might wonder how a scramjet-powered hypersonic missile, such as the Russian Tsirkon, could launch from beneath the surface. The weapon may need to be fired from a submarine that has surfaced given the level of heat and high-speed propulsion required to thrust a weapon forward at hypersonic speeds and sustain those speeds. This may be part of why Russia’s TASS news agency is reporting that a second launch from “undersea” is planned to follow the first surface launch.

“The first launch of a Tsirkon from the Severodvinsk submarine within the framework of development flight tests will be carried out from the water surface position at the beginning of October,” according to the news agency. “Depending on its results, the second launch from underwater at sea targets is scheduled in November.”

It is possible that the Russians might fire the Tsirkon from a submarine that has surfaced given that they have already test-fired the missile from a surface ship several times. Should Russia succeed in launching a scramjet-powered hypersonic missile from beneath the surface, then that development might represent a substantial breakthrough sufficient to generate international attention.

It is notable that the TASS news agency is citing Russian scientists who are suggesting that Russia’s submarine technologies are “superior” to the West. Chief Scientist of the Russian State Research Center Vladimir Peshekhonov informed the news agency that periscope and fiber-optic networking technology built into Russian submarines are possibly superior to that of U.S. Navy submarines.

“Today, the periscope equipment installed on the newest US Navy submarines is no better than the same gear that Russian submarines are equipped with. In this respect, the situational awareness levels of the submarine crews of the US Navy and the Russian Navy are approximately the same, including technical features such as resolution and color contrasts,” Peshekhonov told TASS.

The reference to fiber-optics and periscope technology seems significant, as the U.S. Navy’s Block III Virginia-class attack submarines and the Navy’s nuclear-armed Columbia-class are both being engineered with fiber-optic connectivity. This is a networking breakthrough that enables periscope viewing from an entire range of locations throughout a submarine—without requiring viewing to take place just below the top of the submarine near the surface.