Russian Artillery Could Totally Blow the U.S. Army Away 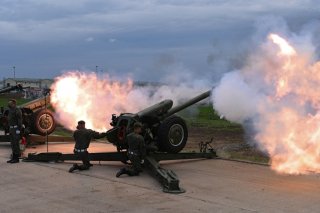 Here's What You Need to Know: RAND warns that U.S. gunners will have to do something they haven’t done for a while: practice defending themselves against attack. American artillery batteries will be stalked by armed drones, attack helicopters, and strike aircraft. Russian tank crews are even practicing “carousel” tactics to break through enemy lines and hunt down hostile artillery.