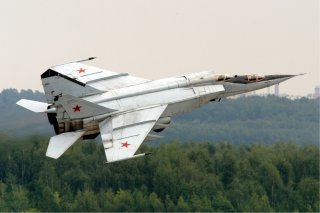 Here's What You Need To Remember: The Foxbat sought to answer the Soviet Union’s need to protect its airspace from fast, high-flying U.S. bombers. The most prominent example was the B-58 Hustler, a Mach-2-capable nuclear bomber that entered service in 1960, but on the horizon loomed the B-70 Valkyrie, a futuristic bomber capable of penetrating Soviet airspace at speeds in excess of Mach 3.

This first appeared last Summer and is being reposted due to reader interest.