The Russian Navy Had Stealth Fighter Company During their Mediterranean Exercise 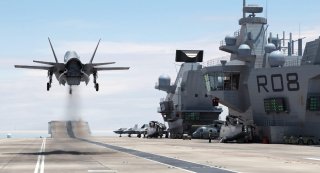 Russia’s Defense Ministry reported earlier this week that a joint Russian task force conducted drills in the eastern Mediterranean Sea. "The joint exercise of the Russian Navy and Aerospace Force continues in the eastern Mediterranean. The tactical methods of reconnoitering the surface and underwater situation were practiced as part of combat training measures," reads the Ministry’s press statement. Five warships, all drawn from Russia’s Black Sea Fleet, took part in the drills. These included the Admiral Makarov and Admiral Essen frigates, both belonging to the Admiral Grigorovich class, as well as the Slava class Moskva heavy missile cruiser and the improved Kilo class (Project 636.3) attack submarines Stary Oskol and Rostov-on-Don.

The exercises encompassed a wide range of aircraft, notably including the Su-35 air superiority and Su-34 strike fighters, that provided support for the Russian naval forces in the Mediterranean. These two fighters have commonly been observed fulfilling strike, patrol, and training missions in Syria over the years following Russia’s intervention into the Syrian Civil War.

Earlier, two MiG-31K interceptors modified to carry hypersonic Kh-47M2 Kinzhal missiles and three Tu-22M3 strategic bombers deployed to Khmeimim Air Base in western Syria. With its Mach 12 speed and mid-flight maneuverability, Kinzhal can pose a credible threat against the carrier strike groups (CSGs) operated by the American and British Navies. Russia’s Defense Ministry published a fairly long video showing some of the ships and aircraft that took part in the exercises, followed by footage of Russian military personnel operating the onboard systems of surface vessels in the Mediterranean.

Russia’s TASS state news outlet reported that the joint task force practiced, among other things, the “skills needed for repelling an air attack.” This is particularly salient in light of reports, supported by video footage allegedly captured from aboard Admiral Makarov, that a British F-35B flew over the joint Russian task force throughout the course of the exercises. The F-35B in question was deployed from the HMS Queen Elizabeth aircraft carrier. Russia’s military announced earlier that it was “monitoring” the Queen Elizabeth, which spearheaded coalition anti-ISIS strikes in June. Russian military observers posited that London is using the operations against ISIS as cover to “evaluate the combat potential of the Russian squadron of vessels in the Mediterranean Sea and the potential capabilities of Russia’s Air Force, including the MiG-31K.” The full scope of the F-35B’s mission remains unclear, but these Russian observers may be on to something: this could be the first time that a Kinzhal-armed MiG-31K was deployed outside of Russia, giving North Atlantic Treaty Organization (NATO) forces a potentially rare opportunity to learn more about the weapon and its delivery system.

The F-35B incident is the latest in a spiral of escalating military tensions between Moscow and London. Last week, Russia’s Coast Guard and Black Sea fleet fired warning shots and dropped bombs to chase the Type 45 destroyer HMS Defender away from Russia’s claimed territorial waters off the Crimean coast.