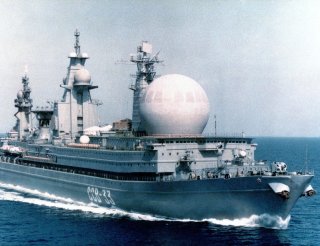 Here's What You Need to Remember: Ural’s bad luck began early on, during her long voyage from the shipyard in the Baltic Sea to her Pacific home port—a two-month trip that took the giant spy ship and her 1,000 sailors all the way around Europe, presumably through the Suez Canal and onward across Southeast Asia to Vladivostok, near Russia’s borders with China and North Korea.

David Axe serves as Defense Editor of the National Interest. He is the author of the graphic novels  War Fix, War Is Boring and Machete Squad. This first appeared earlier this year and is being reposted due to reader interest.