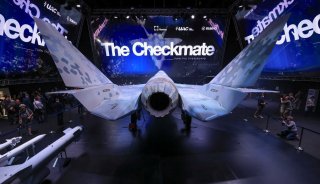 Here's What You Need to Remember: The aircraft is clearly set up for stealth. Besides its wingspan, its other notable features include its angular ruddervators and divertless inlet, both of which are normal features on stealth planes for a smaller radar cross-signature.

On Tuesday, Rostec, Russia’s state-owned defense conglomerate, unveiled its new stealth fighter at the MAKS air show. Before the unveiling, photos had been taken of a mock-up plane underneath a tarp; the tarp was later removed, and viewers were able to gather first impressions from the plane’s shape. Soon after photos of the revealed mockup were made public, Rostec opted to unveil the plane publicly, allowing for closer study.

One of the more interesting features of the Checkmate is its extraordinary wing size—possibly an indication that Sukhoi, the manufacturer, intends to market the plane primarily to the Russian Navy for use on the Admiral Kuznetsov, Russia’s aging aircraft carrier. Another likely possibility is that the Checkmate will be sold abroad to nations operating existing Sukhoi fighters.

Large wings are usually indicative of planes that fly at higher altitudes or take off from shorter runways, like those on an aircraft carrier. For example, the U.S. Navy’s F-35 variant, the F-35C, has a larger wing than the standard F-35, giving it a greater margin of error on the decks of Navy aircraft carriers. The downside of larger wings, though, is that they tend to produce more drag, slowing the plane down.

Having a big wing would be of even greater use to planes stationed on the Admiral Kuznetsov, which lacks a steam catapult to help launch the planes, as U.S. aircraft carriers have. This makes a larger wingspan vital to taking off and landing, given the limited space available on a flattop.

If the Russian Navy opts not to use the plane, it could still see service within the Russian Air Force. The big wing could also help the Checkmate to fly at high altitudes, where it could make the most of advanced sensors and weapons. Flying at high altitudes also improves jet engines’ fuel efficiency, because of the lower temperature and density of the air. The Checkmate is a small plane and likely does not have a large fuel supply, so operation at higher altitudes could be a necessity to use the plane in the most efficient way possible.

The aircraft is also clearly set up for stealth. Besides its wingspan, its other notable features include its angular ruddervators and divertless inlet, both of which are normal features on stealth planes for a smaller radar cross-signature.