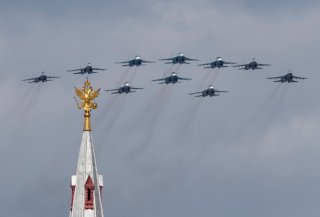 Here's What You Need to Remember: This a forty-year-old bomber is being given a very prominent place in this year’s flypast roster.

Russian aircraft rehearsed for what has shaped up to be one of the most unique Victory Day Parade flypast performances in recent years.

A slew of Russian planes and helicopters recently practiced their routines in anticipation of the May 9 Victory Day parade, commemorating the Soviet Union’s victory over Nazi Germany in World War II.

The flypast rehearsal included as many as seventy-six aircraft, comporting with the seventy-six years that elapsed since the end of World War II. Fifty-three planes and twenty-three helicopters are set to take part in the event. The latter includes three Soviet-era Mi-26 transport helicopters, which will open the parade. These will be followed by Mi-8, Mi-35, and Ka-52 helicopters, as well as the Berkuts Mi-28N aerobatics demonstrator team. The Berkuts, which had previously used Mi-24 helicopters before switching to Mi-28Ns, performed at previous Victory Day parades going back to the 1990s.

The flypast introduction is a rather standard fare for these types of events, but what happens next is not: for the first time, a Tu-160 Blackjack strategic bomber flew over Red Square while being escorted by a wing of Su-35S fighter jets. “We are planning a flight in a traditional formation over Red Square but this year a group of a Tu-160 aircraft escorted by four Su-35 fighters of the Russian Knights aerobatic group has been added,” Alexander Ivashkin, the Aerial Weapons and Tactical Training Chief of the Aircraft Demonstration Center, told Russian media. The Tu-160 is a somewhat curious choice for a flypast showpiece at one of Moscow’s largest annual military exhibitions; though it is among Russia’s latest dedicated bombers, the Blackjack of the 1980s era can hardly be considered new. There are reportedly several upgraded Tu-160 variants in the works, including the upcoming Tu-160M that embarked on its maiden flight in 2020; it is apparently not being displayed at this year’s parade, likely because it is not yet ready to enter service. Then there is the deeply modernized Tu-160M2 revision, which is expected to be delivered to Russia’s Air Force in 2023.

So why, then, is a forty-year-old bomber being given such a prominent place in this year’s flypast roster? One working assumption is that the Kremlin seeks to show off a new airborne weapon. This could be the hypersonic, nuclear-capable Kh-47M2 Kinzhal ballistic missile, unveiled with great aplomb during Russian President Vladimir Putin’s 2018 annual state-of-the-nation address. The Kinzhal missile made its Victory Day parade debut that same year aboard a MiG-31 interceptor. It was previously confirmed that Russia’s military is assessing the possibility and usefulness of fitting the Kinzhal onto the Tu-160; it is difficult to think of a better way of making it official than by flaunting a Kinzhal-equipped Blackjack at this year’s parade. The Kinzhal appears to have a shorter range than the Tu-160’s Kh-55SM cruise missiles, but is exponentially faster at a speed of up to Mach 10 and would grant the Tu-160 platform the means to penetrate U.S. missile defense networks in ways that it previously could not.

The Su-57 fifth-generation air superiority fighter jet, along with such Russian military aviation staples as the Su-35S and Su-34, will be made an appearance toward the end of the flypast event. In addition to the flypast section, the parade involved a mechanized column of over 190 vehicles that included thirty-five types of “new and modernized military hardware.” A total of over twelve thousand servicemen, spread across thirty-seven units, marched across the Red Square.