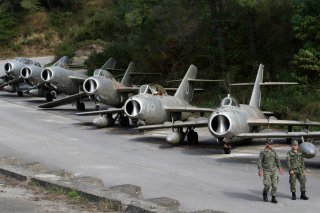 Here's What You Need to Remember: Following a brief stint in the latter period of the Chinese Civil War, the MiG-15 made an explosive entrance in the Korean War. The Soviet fighter proved vastly superior to almost anything mustered by the United Nations coalition air force.

One of the first serially produced swept-wing fighters, the MiG-15 shook western observers with a series of blowout victories in the early days of the Korean War.

In the years following the Second World War, Soviet manufacturer Mikoyan-Gurevich rolled out the MiG-9, a turbojet fighter in part reverse-engineered from German technology. But the MiG-9 suffered from a myriad of turbo-jet related performance issues, including insufficient thrust and chronic reliability issues. The manufacturer briefly entertained the idea of advanced MiG-9 variants with improved engines, but it was ultimately decided that the MiG-9 platform was to be abandoned altogether for the nascent MiG-15 fighter project.

To even Josef Stalin’s surprise, the Soviets managed to import British engines for the fighter— these, in turn, were reverse-engineered and mass-produced as the Klimov RD-45. However, the most striking aspect of the MiG-15’s design was not its engine, but 35-degree swept wings. The MiG-15 was one of the first serial fighters to accommodate this design, which promised better handling at higher sustained speeds. The fighter had a top speed of just over 1,000 km/h, or around Mach 0.87. Intended for an anti-bomber mission, the MiG-15 featured two 23mm autocannons and one 37mm gun.

Following a brief stint in the latter period of the Chinese Civil War, the MiG-15 made an explosive entrance in the Korean War. The Soviet fighter proved vastly superior to almost anything mustered by the United Nations coalition air force. By the end of 1950, MiG-15 squadrons had begun to inflict substantial losses on the outmatched U.S. F-51D’s and F-80’s. “You’re damned right it was intimidating,’’ retired Air Force Lieutenant General Charles “Chick” Cleveland told Air and Space Magazine. “You have to remember that the little MiG-15 in Korea was successful doing what all the Focke-Wulfs and Messerschmitts of World War II were never able to do: drive the United States bomber force right out the sky.” In a 1951 engagement that became known as “Black Thursday,” around thirty MiG-15’s attacked a much larger force of just under fifty B-29 bombers accompanied by roughly one-hundred U.S. fighters. At least ten B-29 bombers and several F-84 fighters were downed or damaged beyond repair, with Soviet sources reporting much higher numbers. In fact, U.S. aerial losses proved so great that U.S. command was forced to renege on its strategy of B-29 daylight bombing runs in favor of less risky nighttime operations.

There is little question that the MiG-15 proved immensely effective in the opening stages of the war, but the full extent of its success is to quantify. Some defense commentators have argued that the Soviet two-tiered kill-confirmation system consistently undercounted the number of U.S. aircraft shot down by Soviet MiG-15’s during the Korean War. Differences in counting systems have led to widely divergent estimates, with U.S. and Soviet reported kills and losses from the same engagements sometimes differing by as many as dozens of fighters. The Soviets claim that MiG-15’s shot down just over 1,000 enemy aircraft over the course of the Korean War. Meanwhile, the U.S. Air Force acknowledges only 139 losses to Soviet MiG-15’s.

The MiG-15 was one of the most operationally successful fighters of the mid-20th century, matched only by the U.S. F-86 Sabre. It is also among the most prolific fighters of the postwar period, at over 13,000 units produced. The MiG-15 was technically superseded later in the 1950’s by the more advanced MiG-17.