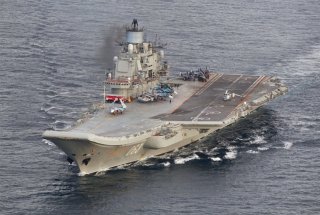 Key point: A Soviet carrier was supposed to deploy far from home in order to intercept, and try to sink, an American carrier sailing toward the Soviet Union. Hence the anti-ship missiles under Kuznetsov’s deck.

That was a decade ago. With tensions between the United States and Russia again on the rise, there have been reports that Moscow might install new anti-ship missiles under Kuznetsov’s deck as part of the aging ship’s off-again, on-againmodernization program.